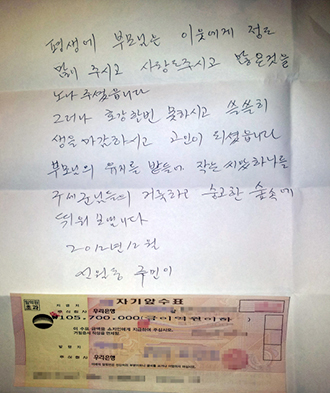 An anonymous donor put a 105.7 million ($97,561) won check in a red donation kettle on the street in Myeong-dong, central Seoul, continuing a series of large anonymous donations to the charity group Salvation Army.

The charity organization said yesterday an unidentified male in his 60s dropped the check along with a letter in the crowded shopping area at around 6:30 p.m. on Sunday.

“My parents always helped those in need,” said the anonymous donor in the letter who only identified himself as a Sinwol-dong resident. “Now both of my parents have passed away. I respect and wish to continue the teaching left by my parents by making this little seed [of a contribution].”

“We think the donor is the same person who put a 110 million won-check in the kettle in Myeong-dong last year, considering the similar writing style found in the letters,” said Yang Youn-suk, public relations manager at the charity group.

The charity group added a campaigner who oversees the donation box in the busy shopping district both this year and last year said the man in his 60s from Sunday looks to be identical to the person who deposited 110 million won in the same place last year.

The Salvation Army said the 100 million won transfer made earlier this month is the largest amount made through an account transfer from an individual in its 84 years of charity mission in Korea.

The Salvation Army runs iconic red donation boxes at over 300 sites throughout the country with an aim to reach 5 billion won in donations this year.

The charity organization will offer the donation kettles until Christmas Eve.