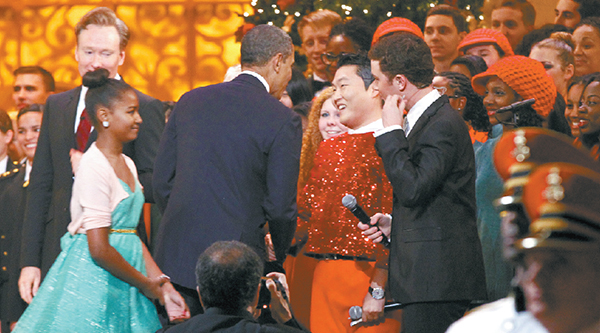 President Barack Obama greets Psy at the end of the “Christmas in Washington” concert at the National Building Museum in Washington on Sunday. [UPI/YONHAP]


WASHINGTON - A holiday concert attended Sunday by President Barack Obama and his family included some non-traditional entertainment this year: a performance by South Korean rapper and Internet sensation Psy.

Psy - wearing an all-red outfit including a sparkling, sequined top - was backed by dancers wearing reindeer antlers as he performed his popular “Gangnam Style” dance, which mimics riding a horse.

The rapper, born Park Jae-sang, had apologized Friday for using what he called “inflammatory and inappropriate language” during anti-U.S. protests at concerts in 2002 and 2004.

The flak from his remarks didn’t dampen the festive holiday mood Sunday.

In brief remarks, Obama said the celebration was “a chance to get in the Christmas spirit, spread some joy and sing along with artists who have much better voices than we do.”

He also said the holiday season was a time to remember that everyone is “incredibly blessed in so many ways,” and to share with the less fortunate, such as those in hospitals, shelters and battlefields far from home.

“Those blessings aren’t just meant to be enjoyed, they’re meant to be used and shared with those who have less,” he said.

The “Christmas in Washington” concert benefits Children’s National Medical Center. Before the show, Obama was accompanied by his wife, Michelle, and daughters, Sasha and Malia, as he presented a basket of books to four former patients of the center, who were dressed as elves.

The 31st annual concert was held Sunday at the National Building Museum and was hosted for a second year by comedian Conan O’Brien.