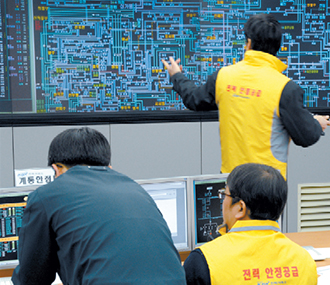 The abnormally early subzero cold is leading to soaring electricity demand and throwing the country into a panic over power supply.

The Korea Power Exchange again issued a power alert yesterday at 5:44 p.m. after electricity reserves dipped below the critical level of four million kilowatts and continued below the level for more than 20 minutes. The alert was lifted 36 minutes later.

Earlier that day, it saw its average electricity reserves drop to 3.98 million kilowatts at 10:23 a.m.

The reserve level was brought up to over four million kilowatts shortly afterward, avoiding an alert in the peak electricity time in the morning, as power saving measures were employed, such as contacting big businesses to cut down on electricity usage.

This comes after it issued the first power alert of the winter season last Friday as its electricity reserves went below the critical level of four million kilowatts and continued below the level for more than 20 minutes.

The mercury dropped to minus 21.6 degrees Celsius (minus 6.88 Fahrenheit) in Cheorwon County in Gangwon in the midst of the ensuing nationwide cold wave yesterday.

Seoul likewise saw a low of minus 11.8 degrees Celsius yesterday, marking one of the coldest early December temperatures in half a century.

Between 2007 and 2010, the highest energy consumption happened in mid-January each year at around noon according to the Korea Power Exchange and Korea Meteorological Administration.

Seocho Precinct Police stated that a homeless man in his 70s died at the Nambu Bus Terminal in southern Seoul on Sunday from the cold.

Police stated that “the incident occurred because it was so cold indoors,” and workers at the bus terminal stated that “in early morning, there was no heat over the weekend so the indoor temperature was very cold.”

A 43-year-old man was discovered on Sunday in the bathroom of Sookmyung Women’s University Station in central Seoul, dead from a heart attack, according to police.

There were also 440 cases of ruptured water pipes this year, over half of which happened over this weekend due to freezing temperatures, Seoul’s Office of Waterworks reported.

From Jan. 7 to Feb. 22, the city government stated that businesses that operate with their doors open or maintain an indoor temperature of over 20 degrees Celsius will be fined as much as 3 million won ($2,780) under the Energy Use Rationalization Act.

Large buildings such as department stores, large supermarkets, hotels, universities and public institutions already have to maintain temperatures under 20 degrees.

But due to the government policy of limiting the heating temperature and the ensuing cold spell, department stores and large discount retailers are seeing a surge in sales of personal heating supplies.

According to the policy of limiting the use of energy for stabilizing winter power supply, large buildings and public institutions began taking measures to limit indoor heating temperatures to under 20 degrees Celsius from Dec. 3 until Feb. 22.