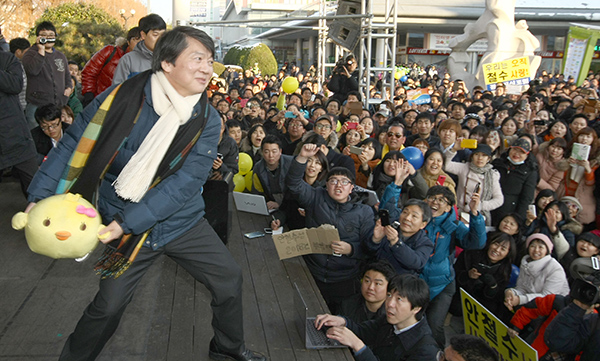 Lives come in different sizes. Going beyond one’s capabilities can sometimes have unpleasant and disastrous results. Leadership often depends on the eye and skill of using people according to their capacity. In China, Xiang Yu of the Chu Dynasty during the Warring States period (475?221 BC) failed to discern the potential of Han Xin so that despite his accomplishments on the battleground he kept him as a lowly guard. Resentful Han ran off to Xiang’s rivaling rebel faction led by Liu Bang.

Liu recognized Han’s ability and sent him to the forefront in the campaign against the doomed Qin Dynasty. Han won one battle after another and was eventually made commander-in-chief. He should have been satisfied with his stunning rise from a humble guard to one of the most admired generals of his time in just a couple of years.

Ahn Cheol-soo stopped short of running in the last stretch of the presidential race. He is expected to modify his political path depending on who wins next week’s election. Will he unite the opposition and run again for president if Park Geun-hye of the conservative Saenuri Party wins? Or will he be invited to the second-man’s seat if Moon Jae-in of the Democratic United Party wins? How big is Ahn’s bowl and what role fits him best?

I remember attending a dinner among venture entrepreneurs around this time eight years ago. I hobnobbed with them as an IT reporter. As the mood reached its peak, I noticed someone sitting in one corner silently. It was Ahn, founder of antivirus software company AhnLab. He hardly talked throughout the dinner. He embarrassingly handed over his freshly published book with his signature.

I met him a couple of times, but every time he struck me as shy. Most of the entrepreneurs at the dinner party disappeared after the start-up bubble popped. Ahn, however, survived the big bang. I came to conclude that he may look genteel and soft outside, but actually he is solid inside.

I maintained my connection to Ahn. He was studying in the United States at the time when a politician I was familiar with asked me if Ahn would be interested in running for the Seoul mayoral post. I knew he would not give it a second thought. But I nevertheless passed on the question. It didn’t take him long to respond. “My happiness is here in this home in America with my wife and daughter. I don’t do much in my room and we don’t say many things to one another. We just hang around and it is my biggest joy,” he said.

There was a rumor of an out-of-wedlock relationship while his name frequented the papers about running for president, but anyone who knows his affection for his family laughed it off. Ahn, however, is no softie. He once said “I admit I look like someone who cannot fire anyone. But hardly. I kick out anyone who harms the organization. There was one who wept in front of me.”

Ahn spoke against unfair business practices by large companies and inspired young people to dream and hope. While invited to speak to business reporters of the JoongAng Ilbo last year, he called Samsung and LG a “zoo.” To incubate and breed start-ups, large industrial companies should invest their capital and buy them off so that entrepreneurs can evolve and expand. It is how the innovation and venture habitat grows in the United States.

But local large companies groom smaller venture enterprises within their zoo, he said. He called for a social environment to encourage young people to create start-ups without fear and worry of failure. While teaching at the Korea Advanced Institute of Science and Technology, he defined entrepreneurship as a risk-taking creative pursuit of conviction.

He is a scholarly gentleman, yet also a tough nut with inner strength and beliefs. He devoted his teaching career to enlightening young people with the spirit of entrepreneurship. This exactly is “What We Need” (title of his book of 2004) or seek from him still engaged in a “Spiritual Showdown” (2001). The person who one day jumps into politics against his past conviction and then suddenly exits, leaving millions of supporters at a loss, does not suit him at all. What he does best is among businesses and young people as a specialist on entrepreneurship.

If he still wants to participate in policy making, he may do well as the minister of information and communications or education, science and technology. Personally, I hope he will stay dedicated to the role of mentor to young people. If he still has presidential ambitions for 2017, it all depends on how well he fills his bowl and his role.

* The author is industry news editor of the JoongAng Ilbo.