Ryu says he will set wins record with Dodgers

Ryu says he will set wins record with Dodgers 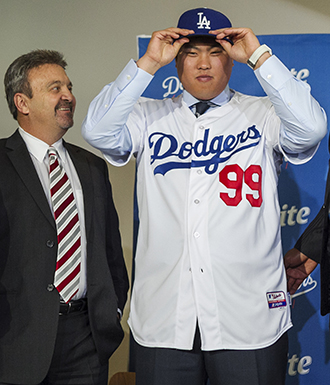 A day after signing a hefty deal with the Los Angeles Dodgers, Ryu Hyun-jin said that he will not leave Major League Baseball without breaking the most wins recorded by an Asian pitcher, set by compatriot and former Dodger star Park Chan-ho at 124.

The Dodgers introduced the 25-year-old Korean pitcher at a press conference at Dodger Stadium yesterday, Korea Standard Time, the same venue where Park made his debut as the first Korean Major Leaguer 19 years ago.

“My ultimate goal here is to surpass 124 wins,” he told the press conference in Korean. “I am sorry to Park Chan-ho for saying this, but I will return to Korea only after achieving the mark.”

Ryu, the biggest talent among Korea Baseball Organization players of his age, already outshined Park in the signing, agreeing to a six-year deal worth up to $35 million on Sunday. Park, as a senior at Seoul-based Hanyang University, started his Major League career with a $1.2 million contract in 1994.

Park, however, strenuously worked his way through a 17-year MLB career, eventually breaking the record for most wins by an Asian set by Hideo Nomo of Japan. He claimed 84 out of his 124 wins with the Dodgers over his nine years with the team.

Ryu’s move to the U.S., a first by a player with a KBO career, was encouraged by Park, who pitched alongside Ryu with the Eagles this year.

Park, 39, announced his retirement as an athlete last month after ending his first season in the Korean league. He congratulated Ryu for the deal with the Dodgers on the Los Angeles team’s Web site.

“I have played baseball while watching Dodgers games since my childhood,” Ryu said. “I really watched a lot of Dodgers games.”

The deal includes $6 million in contract incentives, including bonuses over six years pending the number of innings pitched. It also has an out clause under which he could become a free agent in less than six years.

Ryu said he was very satisfied with the deal, which was made at the last minute.

“I yelled out of joy at home,” he said. “Before and after the deal is like the difference of heaven and earth. To be frank, I was so nervous.”

Ryu, coming off 98 wins and 52 losses with a 2.8 ERA in his seven KBO seasons, said that he will target a double-digit win total and an ERA less than 3.0 for every year with the Dodgers. He has recorded 1,238 strikeouts in Korea and received the Golden Glove twice, in 2006 and 2010.

Ryu is scheduled to come to Korea today for a break and visa issuance. He said he will join the Dodgers for spring training, which will begin in Arizona on Feb. 13.

The first preseason game is against the White Sox on Feb. 24.