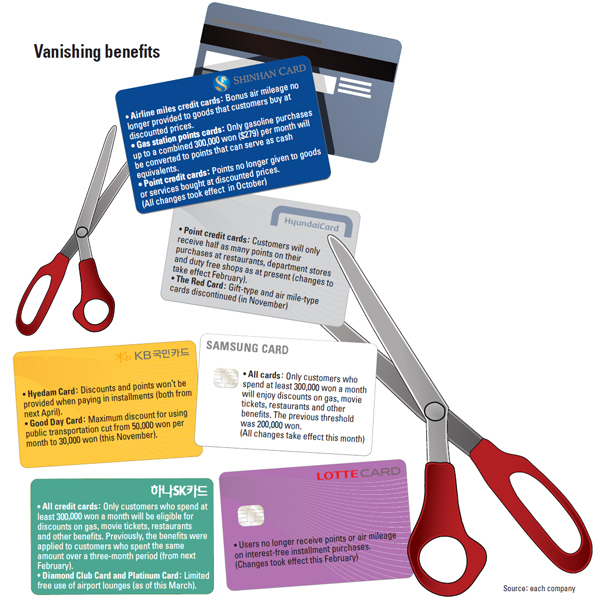 A physician surnamed Kim, 43, who lives in Goyang, Gyeonggi, couldn’t believe his eyes when his credit card bill showed that a total of 81,000 won ($75) had been deducted from his account for his use of airport lounges on three occasions.

Kim, a frequent traveler, has been using a platinum credit card for 10 years as it gives him free access to airport lounges, one of many benefits provided by his credit card company.

He immediately sent an inquiry to the card issuer’s customer service department and learned it has restricted users’ free access to airport lounges based on their previous year’s credit card spending, as of this March.

When Kim complained to a customer service representative that he “didn’t know about the change of terms,” the company said it had notified people via e-mail and by putting details up on its official Web site. The company offered to give Kim a 27,000 won discount off any future use of the airport facilities.

“Credit card companies constantly bombard customers with text messages filled with advertisements and promotions, so it makes no sense they wouldn’t also inform them of changes of terms in this way, as such information is obviously more important and relevant for subscribers,” Kim said.

Credit card companies’ concerted efforts to scale back their services have irritated customers. They normally notify people of future changes to service terms by adding them to users’ bills - or posting the information on their Web sites - six months in advance, in line with the current financial law. E-mail notification is another option, but customers complain that they sometimes miss the message as they get so many e-mails every day.

“What is important is that companies deliver the core part of the news in an accurate and clear way to customers using appropriate communication channels,” said Hang Jin-ja, an official at the state-run Korea Consumer Agency. “Credit card companies’ notification system is outdated.”

Market observers expect them to face more complaints as they prepare to scale back additional credit card benefits next year for regular customers to make up for the losses incurred by having to slash their transaction fees for mom-and-pop stores as of this September after the government revised related regulations.

Shinhan Card has been offering less air mileage and fewer gasoline points since October. It no longer gives bonus air miles for goods that customers buy on discount, and has set a limit of 300,000 won a month on gasoline purchases that can be stored as points and used as cash equivalents.

Seo Kyu-bong, a self-employed businessman in Bucheon, Gyeonggi, was one of many subscribers who found out about the changes belatedly.

Seo, who spends over 500,000 won on gasoline a month, subscribed to Shinhan Card’s gasoline point credit card in May. But the card is now effectively useless as far as he’s concerned after the card company set strict limits on how many points can be built up.

“I didn’t see any notification of the changes on my e-mailed credit card bill,” Seo said. “It turned out that the company sent me a separate e-mail, which I ignored because 99 percent of time they are advertisements and promotions that I’m not interested in.”

Other companies like Hyundai Card, KB Kookmin Card and Samsung Card are also cutting benefits for VIP card users from next year.

According to a document that the Financial Supervisory Service (FSS) submitted at the request of Saenuri Party lawmaker Kim Jae-gyeong, credit card issuers have either abolished or trimmed a combined 111 benefits since 2009.

“Customers pay tens of thousands of won in annual membership fees and get new credit cards because they want to enjoy the benefits offered by the issuers,” said Cho Nam-hee, head of the Financial Consumer Agency. “Credit card companies make a big fuss whenever they promote benefits to customers on new cards, but they are much quieter about rolling these back later.”

Lee Sang-gu, an official at the FSS, said the financial watchdog is considering whether to make the card issuers issue text-message alerts in future, an idea most companies abhor.

“Issuers use the current channels because they are cost-effective. Sending text messages will generate additional costs,” said an employee at one local credit card company.