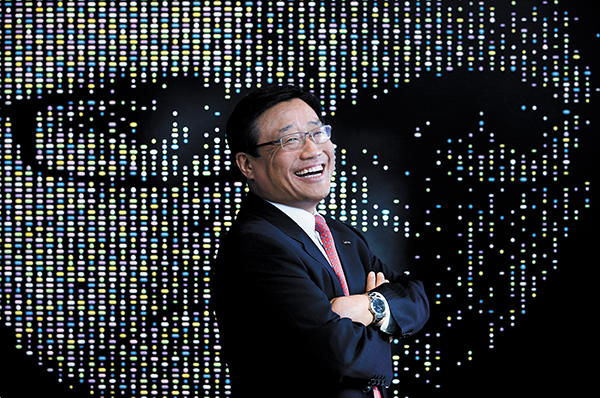 
With a new leader in China and Korea preparing to elect a new administration Dec. 19, relations between the two countries can effectively be reset.

Much of the world is watching closely to see how China will move forward under Xi Jinping, who will officially replace Hu Jintao early next year.

In Korea, local enterprises and politicians also are tracking moves in China to get a sense of whether the country will move to embrace economic, social and political reforms or adopt an even more nationalistic bent.

Against this backdrop, a new book offers an analysis of China’s past, present and future. Oh Young-ho, president of the Korea Trade-Investment Promotion Agency (Kotra), wrote “Connecting with China’s Future: China’s Economy Under Xi Jinping and Korea’s Strategy” by drawing on his experience overseeing Korea’s trade and foreign investment.

The JoongAng Ilbo sat down with Oh to discuss China’s economy and Korea’s plans to remain competitive.

Q. How do you rate Xi at this point?

A. The four former leaders [Hu Jintao, Mao Zedong, Deng Xiaoping and Jiang Zemin] all seemed really outstanding and high-caliber figures. But few people see Xi as being exceptional. Li Keqiang seems closer to his predecessors, but Xi comes across as a “veiled dragon.”

So how did he rise to the top?

The current age requires a leader like Xi. When China pushed for economic growth, it needed real movers and shakers. But as the drawbacks of its rapid development become apparent, it now needs to embrace a leader with a longer-term view.

What can we expect from the Xi era?

It will be recorded as a turning point, when China either becomes a developed nation and copes with the internal issues or it doesn’t. Xi’s appointment is fitting at this time.

What about regional ties?

Xi doesn’t favor only South Korea. He also likes Japan, mainly thanks to the warm reception he has received from Japanese companies. When Xi visited Japan, the companies helped engineer a meeting with Japanese Emperor Akihito and organized it so that [Xi’s] wife [singer Peng Liyuan] could perform on stage there. This shows how business-savvy and forward-looking Japanese companies are.

In contrast, Korean business leaders just had lunch with him, or something like that. We need to learn a few things from Japan.

From what perspective should we see China?

[American futurist writer] Alvin Toffler once pointed out that if a country can’t geographically move away from China, it should come up with ways to live in harmony with it. This means we should take a pragmatic approach, rather than argue about whether or not China is on our side.

Now is the time to redefine our perspective on China. We think we know the country well, but actually we don’t. Many misconceptions, wrong stereotypes and prejudices hinder our views and forecasts.

What role will China adopt as it moves beyond being “the world’s factory?”

China is transforming itself from being the world’s manufacturer into the world’s market. This is why the state of China’s local market is vital. Under Xi, China will pursue quality growth to bring the nation’s economy onto a slower but healthier track. It looks to reduce inequality between the eastern coastal regions and western area, revive declining industries and expand domestic demand by income-redistribution measures. All these are well reflected in China’s 12th Five-Year Plan, a road map for the country’s future economy. Korean industries need to carefully examine such trends to remain competitive.

Future industries will be green energy and service-related. We also need to acknowledge that urbanization will continue at a rapid pace.

It’s interesting to note that the main theme of [incoming premier] Li Keqiang’s doctoral dissertation was urbanization. This means the demand for intelligent transportation systems will also increase dramatically.

One sector we often miss is China’s growing advancement in terms of scientific technology. Such development stalled during the [1966-76] Cultural Revolution, but the sector is now reviving after decades of reform and opening up.

China’s “tech era” is on the horizon, so we need to focus more on high-end IT products.


Which strategies may work for Korean enterprises?

They shouldn’t see China as a source of cheap labor churning out everything. They need to provide something that the Chinese people and their companies need, eyeing China’s local market. In a nutshell, “made in China” becomes reworked as “made for China.”

One way is to offer a modest version of a product at cheaper prices to those living in the western inland region. A U.S. firm selling shampoo adopted this strategy, and it was a big hit.

Another strategy is to build a strong partnership with Chinese counterparts to tap their huge market. This is why I support the idea of a free trade agreement with China.

As the world’s economy slows, is China in for a hard landing?

The world is beset by the euro zone debt crisis and U.S. fiscal cliff. Meanwhile, Chinese companies are piling up their inventories. They are preparing for the time when the economy rebounds. Moreover, many observers expect some kind of stimulus measures when Xi takes office next year.

China is a country that can take advantage of the global recession. It became stronger during the IMF crisis in 1997 and again during the 2008 global credit crunch. After the latest crisis, China will get even stronger.

How should Korea make sure it doesn’t get left behind?

The financial crisis facing many countries is unlikely to be resolved anytime soon. But those that can turn crisis into opportunity will prosper.

Although there has been much debate about whether China’s economy is destined for a soft or hard landing, I’ve reached the conclusion after years of research that there may be no landing at all for the time being - meaning it will not sink into a downward spiral [despite recent declining growth].

The first five years of the new leadership will likely be a period of adjustment, and the next five may see a jump in growth as such policy changes bear fruit.

China now ranks as the world’s second-largest economy and top exporter, and has the highest foreign reserves. It has become a so-called G2 power alongside the United States and will further consolidate its grip on the world economy in the next 10 years.

How have you personally cultivated ties with China?

When I worked as an assistant secretary at the Ministry of Commerce, Industry and Energy in 2005, we used to have friendly soccer matches with Chinese officials. These matches became an annual event.

At one point, I asked if we could invite Japanese servicemen. But Chinese officials didn’t say anything. They just stared at the sky. This shows just how complicated relations are between China and Japan.

We also need to think hard about how we can benefit from the tension between our two neighbors.

Kotra celebrates its 50th anniversary this year. How do you feel?

I feel rewarded because Korea’s trade volume reached $1 trillion. I have no doubt that Kotra contributed to this achievement.