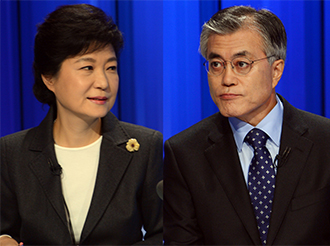 Presidential front-runners Park Geun-hye and Moon Jae-in stepped up their fights in their latest debate, a clear departure from their first, which was hijacked by aggressive minor candidate Lee Jung-hee.

Park of the Saenuri Party, Moon of the Democratic United Party and Lee of the Unified Progressive Party sparred at their second debate on economic issues Monday night. While Lee stole the show on Dec. 4 with her no-holds-barred attacks on Park, Monday’s debate was a more direct conflict between Park and Moon.

Moon launched a pre-emptive attack on Park by holding her jointly responsible for some failures of the current Lee Myung-bak administration. Park tried to show the difference between her and the president by reminding Moon that the DUP once attacked the Lee government for conducting illegal surveillance of her because it perceived her as a political rival.

She then attacked Moon by saying his policies were no different from the failed policies of the Roh Moo-hyun government, in which he was the presidential chief of staff. Park also criticized Moon for his plan to create a coalition government with former independent presidential candidate Ahn Cheol-soo since they have different ideas on key economic issues, particularly reform of the chaebol by banning cross-unit equity investments and reviving the equity investment ceiling in the antitrust law.

Moon didn’t budge. “Although we seek politics of unity, it’s impossible for my policies to be 100 percent consistent with those of Ahn,” he said. “When 99 percent are the same and 1 percent is different, the Moon Jae-in government will make the decision.”

Throughout the debate, Moon attacked Park’s Saenuri Party’s friendly attitude toward conglomerates by using statistics issued by the Lee government.

Lee continued attacking Park, particularly the fact that her father was the late strongman Park Chung Hee, and Moon kept a distance from the minor candidate. While Lee argued that conglomerates must be dismantled, Moon said, “I think conglomerates should be reformed, but my goal of economic reform is to make conglomerates that are loved by the people.”

Lee tried to go after Park by straying from economic topics, and the moderator issued a warning to focus on the assigned theme.

Monday night’s debate had a 27.7 percent rating among viewers in Seoul watching on the three major TV networks: KBS, MBC and SBS. The rating was lower than the 29 percent for the Dec. 4 debate.

Analysts were divided yesterday as to who won Monday’s debate.

“Park was slightly better than Moon, while Lee scored a failing grade,” said Oh Jung-gun, professor of economics at Korea University. “Park presented short-term and long-term pledges, and they were convincing because they were specific. Moon said economic democratization is the solution for growth, and it was ambiguous.”

Prof. Park Sang-in of Seoul National University’s Graduate School of Public Administration thought Moon was the winner. “Moon prepared enough data and examples,” he said. “In this debate, the viewers could see that Moon and Park have different views on economic democratization. Moon’s view was conglomerate reform, while Park’s view was stopping the large business groups from abusing their superior positions. Park didn’t even use the term chaebol. She called them large companies.”

Another analyst proclaimed a tie. “Moon performed more strongly in the fields that required expertise, while Park approached the issues carefully by taking into account feasibility and the importance of coming up with financial resources,” said Lee Bong-joo, professor of social welfare at Seoul National University.

The survey was conducted on 640 viewers of the debate. The poll had a 95 percent confidence level and a margin of error of plus or minus 3.9 percentage points.