Pyongyang dismantles its rocket to transfer it

Pyongyang dismantles its rocket to transfer it 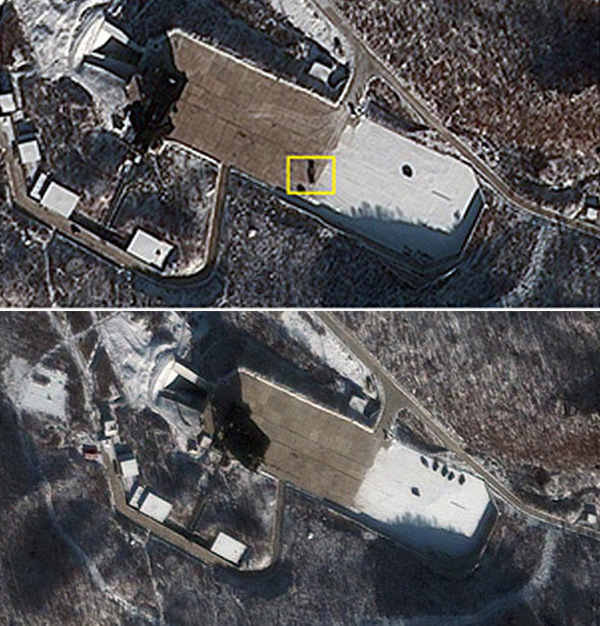 
North Korea appears to be removing a three-stage ballistic rocket from a launchpad, the South Korean military detected yesterday.

But analysts said they still expect Pyongyang to try to fire the rocket by the end of the year.

Pyongyang said Monday it would extend the launch window for the rocket, called the Unha-3 or Kwangmyongsong-3, from Dec. 10-22 until Dec. 29. It cited “a technical deficiency” in the rocket’s first stage.

“Starting from Monday, a group of vehicles carrying equipment used for dissembling a rocket were detected near the launchpad,” a high-ranking South Korean government official told the JoongAng Ilbo yesterday. “We also found that a big crane is dissembling the rocket from its upper part, the third stage.

“It’s still unconfirmed why the North is taking apart the rocket,” the official added, “whether the regime gave up the launch or just tried to repair the technical glitch on the first stage.”

South Korean and U.S. spy agencies are in the process of analyzing the latest satellite images near the launch station, sources told the JoongAng Ilbo.

A rocket scientist at the South’s state-run Korea Aerospace Research Institute told the Korea JoongAng Daily on the condition of anonymity that the flaw seems to be serious but fixable.

“It would be hard for the North to repair a flaw on the first stage, which is the bottom of the rocket, while the whole rocket is erected,” he said. “I think the North will dissemble the rocket first, move the pieces to the vehicle assembly building in order to repair the deficiency and then set it back on the launchpad.

“If the North finds more work is needed, it could simply replace the first stage with a new one,” he said. “They just need some time.”

Seoul, Washington and Tokyo intensified their monitoring of the launch in Tongchang-ri, northwest North Korea, since Monday.

The three countries are spending at least 1.58 billion won ($1.47 million) every day on the monitoring systems, using high-end technology and state-of-the-art military devices.

South Korea is estimated to be spending about 10 million won every day on missions by an Aegis warship equipped with the high-end radar system SPY-1D.

It is paying another 20 million won daily to operate a spy plane called the Peace Eye between 6 a.m. and 1 p.m.

Washington spends more. Deploying the U-2, a spy plane that flies at an altitude of 15 kilometers (49,000 feet), costs 1 billion won for each mission.

Tokyo is spending more than 50 million won daily for its missile-intercepting system.

If undisclosed spy activities and a couple of U.S. military satellites are included, the price the three countries are paying for the joint surveillance reaches a maximum of 2.5 billion won for a single day.

“Now that the North has said it will prolong the launch window, we can’t help but keep monitoring its moves until it fires the rocket or dissembles it,” a South Korean government official told the JoongAng Ilbo. “Due to the extension, the total cost for surveillance [until Dec. 29] increased by 10 billion won.”