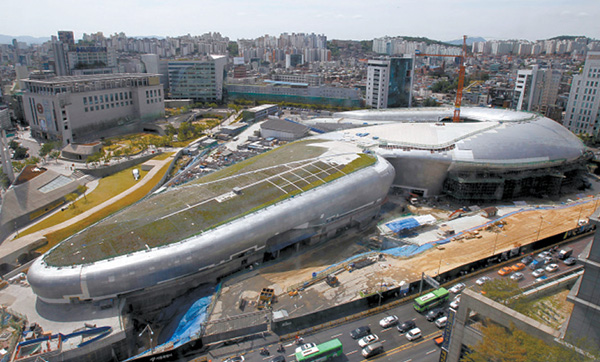 
The Dongdaemun Design Plaza, a large-scale construction project put forward by former Mayor Oh Se-hoon as a part of the “Design Seoul” project targeting experts in the design industry, will be rebranded as a place for citizens and local merchants as well as international tourists.

The Dongdaemun Design Plaza has been under construction since 2009 with the idea of creating a glitzy fashion and design center.

It will feature a mall and multipurpose convention and exhibition halls on the 85,320-square-meter (21.1-acre) plot of land in Euljiro, central Seoul.

It was supposed to be completed by July this year but was postponed due to changes in political leadership.

The project has been considered another white elephant along with the Floating Islands on the Han River.

The Floating Islands are a project created by Oh for fashion shows and opera concerts, the first completed piece of the municipal government’s Han River Renaissance Project in May 2011.

Mayor Park Won-soon, who replaced Oh in October last year, said that the plaza isn’t worth spending hundreds of billions of won of taxpayers’ money.

The plaza is now 87 percent complete. Construction work is expected to end in July next year and it should open to the public in March 2014.

Park yesterday held a press briefing at City Hall and presented a revised plan for the four-story (with three additional underground levels) design plaza that can be operated without additional taxpayer support.

Park said that the plaza should be a place where more citizens and local merchants can visit and also visit the nearby Dongdaemun market, known as a shopping district.

The city government said it decided to use places that were designated for multipurpose convention and exhibition halls with an area of 2,992 square meters that have 1,500 seats, as an open studio where small- and medium-size design companies as well as individual designers both domestic and abroad can launch their products and designs.

It added that movie premieres and TV award ceremonies will be held in the area.

“We expect the Dongdaemun Design Plaza to become a mecca of design,” Park said during the briefing. The city government said it will also launch the “Dongdaemun Runway Project” to discover new design talent.

In the business center that will be located in the 1,702 square-meter second floor, merchants engaged in the fashion industry will open their businesses.

It will provide legal and patent consultation service for merchants. “We want to promote the Dongdaemun Design Plaza as a place for tourism and commerce that can introduce Seoul’s food, fashion and entertainment,” said Baik Jong-won, the CEO of the Seoul Design Foundation. “We think we can attract 5.5 million visitors including international tourists a year.”

But some in the design circle are disappointed with the revised plan.

“We expect the city government to build a venue professional designers can use for producing creative cultural products,” designer Chang Kwang-hyo said.