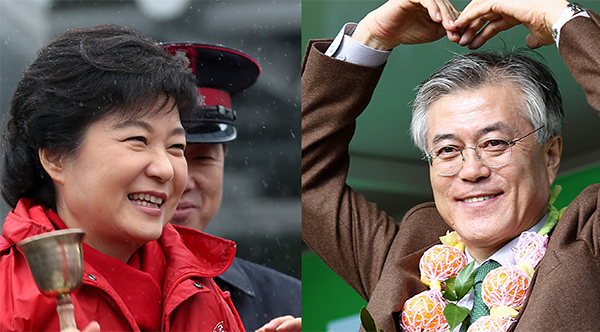 Alexander the Great, who led his Macedonian Army to create an empire covering most of the ancient world, was once caught in a difficult situation. His men were demoralized by the overwhelming size of their enemies that were outnumbering them 10-fold. He stopped by a temple to pray for victory. Then he turned to his soldiers and declared before tossing a coin, “I will test the power of my prayer. Heads means we will triumph, tails the opposite.”

He solemnly threw the coin into the air. The coin was flipped to show the head. His soldiers went rapturous. Enlivened, they successfully crushed their enemy. Rejoicing in their triumph afterward, soldiers thanked the gods for answering their commander’s prayer. But Alexander quietly smiled and muttered, “Both sides of the coin were heads.”

I bring up the episode out of anxiety for the post-election economy. To tell the truth, I don’t really care who wins the election. Of course, there will be a difference depending on which of the two - Park Geun-hye of the conservative Saenuri Party and Moon Jae-in of the liberal Democratic United Party - becomes the president.

Regardless of who is elected, however, the incoming president will need a miracle to restore the sagging economy. Even the most competent won’t find it easy. Let’s take the current government’s economic performance as an example. President Lee Myung-bak claimed himself as a trouble-shooter and promised a strong economy. Yet the economy grew less than 3 percent on-year. It was not entirely his mismanagement. Other countries are in a worse state. The global economy, still fragile from the 2008 financial meltdown, slipped into another tailspin due to the fiscal and credit crisis in the euro zone economy. The next government is up against more challenging times and won’t likely do any better.

The U.S. Federal Reserve decided yet again to keep interest rates near zero until mid-2015. The rates have been hovering close to zero since late 2008 and the Feds decided last year to maintain the benign target rate until mid-2013. It extended the policy to 2014 and again to 2015, suggesting how slow and difficult it is for the U.S. economy to pull itself out the slump. The Fed policy also underscores the need for artificial supportive action to keep the economy moving, albeit at a snail’s pace for the next three years. If it somehow avoids the so-called fiscal cliff and immediate danger, the U.S. economy is not expected to pick up a confident growth pace from 2015. Many believe the U.S. economy may recover to the growth pace of pre-2008 from 2019.

Prospects for our economy for the next five years cannot be good with the world’s largest economy mired in sluggishness. The incoming president will likely spend most of the five-year term battling with the economy. Growth at best would reach 3 percent annually. It is why I believe it won’t make a great difference in the economy no matter who becomes president.

If the economy worsens, fissures in the society inevitably widen. People will turn more aggressive and protective of their self-interests. Job insecurity and losses will be the biggest problem. As many as 70,000 jobs are at risk depending on a growth rate of 1 percent. The economy needs to expand annually by 5 percent in order to maintain the current employment rate of 60 percent and meet a newly created workforce of 60 percent. If the economy underperforms at around 3 percent, more than 100,000 economically-active people will be without jobs and demand social welfare benefits to survive.

Times of crisis call for strong and bold leadership - a kind that Alexander the Great demonstrated by making a coin with two lucky sides. There is no sign of such wisdom and courage from the two leading presidential hopefuls. Both of them just appear nice. Both emphasize trust, honesty and principles. They are all honorable values, but fall short of leading the society at tumultuous times and ushering the economy out of crisis - another reason that we do not pin big expectations on the incoming president.

So I plead to the presidential hopefuls to train their eyes on the country’s future, not the election. Once elected, I advise the president to drive the economy primarily to generate growth instead of distributing wealth. I agree that greedy and self-serving corporate practices need to be fixed, welfare security enhanced and the wealth gap narrowed. But growth at least can help to create wealth that can be spread among the people. On the other hand, fair distribution cannot promote economic growth.

I am not saying the president should hang entirely on economic numbers and immediate results. What is imperative are actions to stimulate sustained growth and vitality. In difficult times, it is important for individuals as well as the state to prepare for the future. The incoming president’s most urgent task would be restoring the growth potential rate back to the 5 percent level from the current 3.8 percent.