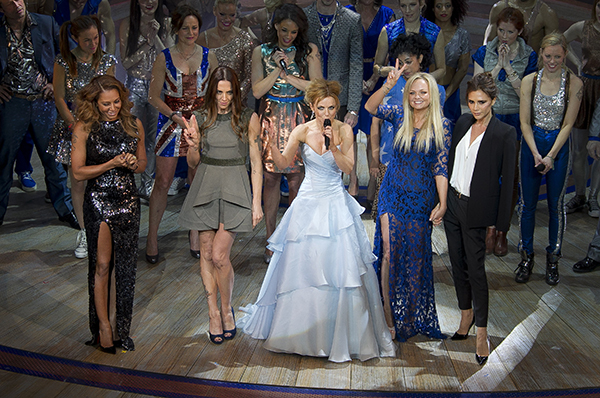 LONDON - All five members of legendary British pop group The Spice Girls braved sub-zero conditions to greet fans on the red carpet at the opening night of stage musical Viva Forever in London on Tuesday.

True to form, Beckham kept her bandmates and fans waiting after getting stuck in traffic, but the remaining members kept busy by posing for pictures on their mobile phones and hugging.

The group’s biggest hits provide the backdrop to the show, which lampoons TV talent show “X Factor” and explores the themes of motherhood and friendship.

Writer and comedian Saunders said she was inspired by the five-piece’s “extraordinary energy.”

“When the Spice Girls were at their prime my three daughters were huge fans and in writing the musical I wanted to bring that all back,” she explained in the official program.

“That sense of excitement and slight anarchy. The joy of being a girl and being able to be whatever kind of girl you choose to be,” she added.

Simon Fuller, manager of the 55-million-selling band, threw his weight behind the production, declaring “the spirit behind the Spice Girls lives again.”

Bunton, Mel B, Halliwell and Beckham all attended with their children, and have previously said they hope that the show will introduce their music to their sons and daughters.

Taking to the stage at the end of the show, the band paid tribute to the show’s creators and actors.

“There are so many people to thank, thank you all for being here but the people I’d like to thank is the wonderful cast,” said Mel C.

Halliwell praised producer Judy Craymer for “making the Spice Girls’ dream come true” calling her a “true woman of girl power.” Beckham, who sat apart from the other members during the show, thanked Saunders and her family “for being here, I love you all.”