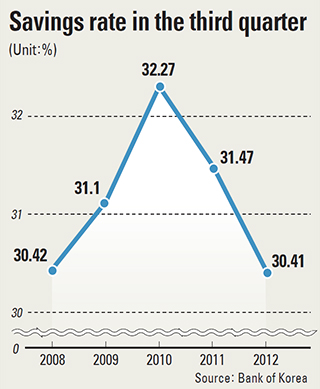 Low interest rates on deposit accounts and the expanding use of credit cards has pushed down the savings rate to its lowest level in three decades.

The savings rate, after hitting an all-time high in 1988 at 41.5 percent, has continuously fallen after retreating to 38.1 percent the following year.

When the nation was struck by the unprecedented credit card default crisis in 2002, it fell to 30.5 percent. And since then it has been moving back and forth in that range. 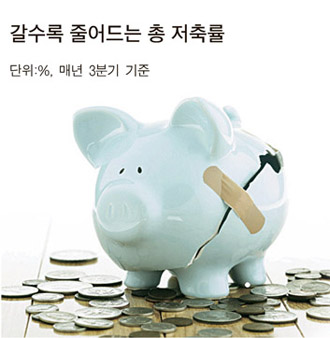 Some experts say the savings rate could further drop to below 30 percent as the nation’s economy is expected to struggle next year.

The central bank recently announced that third quarter growth was worse than what it had expected.

The economy was almost flat in the third quarter compared to the previous quarter when it inched up only 0.1 percent. This is lower than the central bank’s initial estimate of 0.2 percent.

Ko Ga-young, a researcher at LG Economic Research Institute, said the falling savings rate is largely because people are becoming more financially strained and saving what little they have.

“If the savings rate continues to fall, it would hurt the future growth of the economy as the injection of investment will likely shrink.”

The average household income growth in the past decades has been falling.

When accounting for inflation, the income that people bring home fell even sharper recently.

This is the lowest growth since the 1.7 percent expansion in the second quarter of 2009, when the economy was still struggling from the impact of the 2008 global crisis.

“To raise saving rates, the first thing that needs to be solved is the increasing debt,” said Park Jong-kyu, senior researcher at the Korea Institute of Finance.