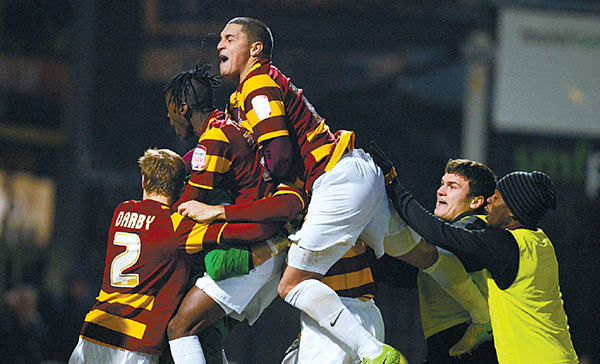 
Bradford City manager Phil Parkinson hailed his penalty-kick kings after they dumped Arsenal out of the League Cup quarterfinals with their ninth straight shoot-out success.

Bradford, playing in the fourth tier of English football, went through to the last four on Tuesday after beating the Premier League side 3-2 on penalties at a packed Valley Parade after the sides had finished 1-1 after extra time.

Arsenal had needed an 88th minute equalizer from Thomas Vermaelen to force extra time, but despite putting Bradford under immense pressure they could not finish their numerous chances to kill the hosts off.

Bradford, who last played in the English top flight from 1999 to 2001, had won its last eight shoot-outs and made it nine in a row when Vermaelen missed Arsenal’s final spot-kick.

“To be only three minutes away from beating a team of Arsenal’s caliber says it all,” Parkinson told the club’s official Web site.

“The talk after the game might be about the penalty shoot-out win and our run of penalty victories, but that shouldn’t take anything away from the lads’ performance.”

Without a trophy since winning the FA Cup in 2005, Arsenal put out a strong team that included Gervinho, Aaron Ramsey and Lukas Podolski but were caught cold when Garry Thompson put Bradford ahead with a side-foot finish in the 16th minute.

Arsenal took its time to get to grips with the buzzing hosts but almost made it 1-1 when Francis Coquelin hit the woodwork in the 38th minute before Gervinho squandered a glorious chance to equalize with the goal gaping.

Arsene Wenger’s side was on top throughout the second half and the pressure paid off in the 88th minute when defender Vermaelen nodded home.

“This result means everything to us, that’s the players, management and staff,” added Parkinson.