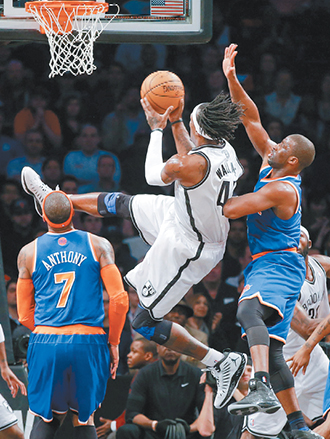 Brooklyn Nets forward Gerald Wallace takes to the air past New York Knicks forward Carmelo Anthony and guard Raymond Felton as he shoots to score in the first quarter of their NBA basketball game in New York, Tuesday. The Knicks rallied from behind to win the New York rivalry 100-97. [REUTERS/YONHAP]

NEW YORK - Now this Knicks-Nets rivalry is really on.

If it hadn’t started when the Nets left New Jersey and set up shop in the Knicks’ city, it surely arrived when Jason Kidd delivered the tiebreaking 3-pointer Tuesday night, making himself an enemy of his former franchise.

Williams was kidding, the point guards are friends. But Nets fans who watched Kidd ask out of the organization and Carmelo Anthony refuse to come could easily work up more dislike of the Knicks after watching those two Tuesday.

Anthony scored a season-high 45 points, Kidd made the tiebreaking shot with 24 seconds left, and the Knicks rallied from an early 17-point hole to beat Brooklyn 100-97.

Kidd finished with 18 points against his former team, who used to dominate the Knicks when he played in New Jersey. He pumped his fist afterward in what he said was as much emotion as he shows, though denied taking any special pleasure in beating the Nets.

Now the series is tied at 1-1 since the Nets moved to Brooklyn, both games coming down to the tense final minutes.

“It is [a rivalry]. I mean, after that first game, we might as well accept that,” Anthony said. “It is what it is. They’re in our division, we see them four times a year. It is a rivalry. It’s great for New York to have that in Brooklyn and in Manhattan. When we come here it’s a battle. When they come there, it’s going to be a battle. We expect that.”

Gerald Wallace scored 17 points, but both he and Williams missed potential tying 3-pointers on the last possession after Kidd broke a 97-all tie with his 3-pointer from the left side while being fouled by Jerry Stackhouse.

Kidd missed the free throw in an otherwise terrific effort for the 39-year-old point guard who helped carry the Knicks while fellow point guard Raymond Felton was struggling through a 3-for-12 night. Kidd had six rebounds and six assists, playing 38 minutes.

There were wild swings in momentum and crowd support in the second half, once the Knicks had gotten themselves untracked after the Nets threatened to run them off the floor in the first quarter.

The crowd was loud and energetic, the players and fans eventually matching the playoff-like intensity from the first meeting, a 96-89 Nets victory in overtime here on Nov. 26. That had left both teams tied atop the Atlantic Division at 9-4, but the Knicks have since gone 7-1 to surge to the top of the Eastern Conference, while Brooklyn has gone 2-5.

It occasionally felt like a Knicks home game, with “MVP! MVP!” chants for Anthony - which the Knicks think he deserves - and a black-and-orange dressed Spike Lee sitting courtside and yelling at the referees.