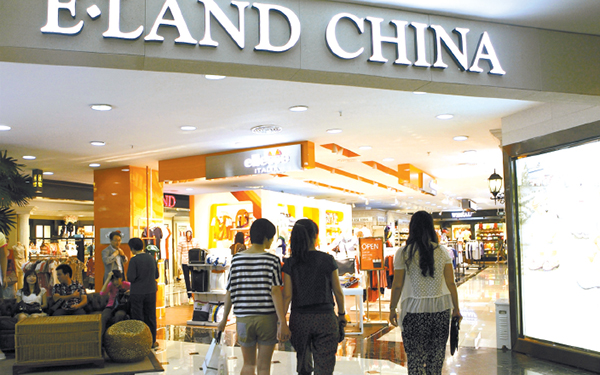 
E-Land Group intends to become a fashion giant through growth in China, and also wants to spread into such other business areas as food and leisure.

E-Land currently operates 6,000 stores in 231 Chinese cities with a total of 35,000 employees working at its headquarters and 13 branches.

This year’s sales are projected at 2 trillion won, and the company has had an average of 50 percent annual sales growth every year since 2002.

Sales of E-Land brand and the Teenie Weenie brand products, the company’s two most popular, are expected to reach 800 billion won this year.

Now the company wants to expand from fashion to restaurants, coffee shops and hotels.

It also wants to expand its business from eastern China westward.

In addition, it is reshaping its business model by moving its fast fashion brands from department stores to shopping malls and independent stores.

The company’s main goals are to increase revenue from the fashion business to 7 trillion won, to double the number of its outlets to as many as 12,000 and bring the number of its brands up from 30 to 70 by 2014, said Park during a press conference in Shanghai Tuesday.

It will launch 14 new brands next year - seven on its own and seven through strategic alliances with global brands - with a goal to introduce at least 10 new brands every year.

It is also working on strategic partnerships with global brands, acquiring a 60 percent stake in Kate Spade and collaborating with global clothing brands such as Guess and Wrangler.

Prior to the press conference on Tuesday, E-Land Group said it concluded a signing ceremony with Nike Golf to tap into China’s golf market.

From now on, E-Land will be responsible for the distribution of Nike Golf products.

With Ashley, Korea’s No. 1 family restaurant in terms of number of outlets, and its coffeehouse chain Cafe Lugo, E-Land will tap into China’s food service market.

It will open an Ashley restaurant in the YaoHan Department Store, one of the best commercial areas in Shanghai, and a Cafe Lugo in the Jinqiao Shopping Mall.

“Around the big cities in China, the company is expected to achieve annual sales of 3 trillion won by opening 200 Ashley restaurants and 1,000 Cafe Lugo stores by 2016,” Park said.

“The potential in food is much bigger than in fashion,” Park said.

It is also entering into the hotel business with a plan to acquire nine more hotels after it recently acquired the Guilin Hotel in China.