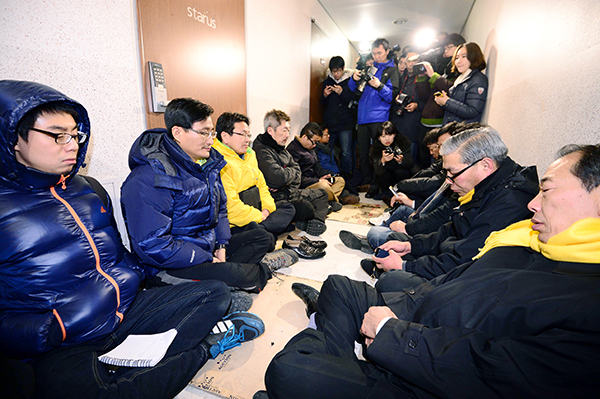 Officials of the main opposition Democratic United Party and reporters yesterday sit in front of the apartment where the DUP claims a 28-year-old employee of the National Intelligence Service made a series of Internet postings criticizing their candidate Moon Jae-in. [NEWSIS]


Following the largest opposition party’s accusation of the National Intelligence Service’s intervention in the presidential election to hurt its candidate, the nation’s main spy agency said yesterday that it will take legal action to counter the Democratic United Party’s claim.

The DUP said Tuesday night that a 28-year-old employee of the National Intelligence Service made a series of Internet postings criticizing their candidate Moon Jae-in.

“We received a tip that the intelligence service recently expanded its psychological operation bureau under the third deputy director and assigned 76 members,” said Representative Jin Sung-joon, a spokesman of the DUP.

“The informant said they have made postings on the Internet to intervene in domestic politics.”

The DUP identified a 28-year-old worker of the psychological operation bureau as the suspect involved in the election law violation and made a report to the police and the National Election Commission.

Some DUP officials, police and the election commission officials made a visit Tuesday night to her residence in Yeoksam-dong, southern Seoul, but she refused to cooperate with the investigation.

“She was alone in the officetel and we asked her if she was an NIS employee,” a police official said. “She said no, so we had to leave. We cannot proceed with the investigation without a warrant.”

After the police and the National Election Commission official left, the Democrats remained in the hallway overnight, claiming she worked for the cyber smear campaign against Moon for months under the directive of the NIS.

Practically locked inside her residence, the woman gave phone interviews to the media earlier yesterday morning. She admitted that she, indeed, works for the NIS, but it was a stretch to say that she lied about her identity.

“No NIS employee will publicly reveal the profession,” she said.

“As an NIS worker, I maintained political neutrality,” she said. “I have never posted any malicious messages about a presidential candidate.”


The NIS also admitted that she is one of their employees, but denied that her mission was to intervene in politics. “The DUP’s accusation is groundless,” the NIS said in the press release. “The NIS has never engaged in any political activities to support any specific candidate.”

The NIS stepped up its counterattack on the DUP yesterday. In its press release, the intelligence agency said it will take strong legal measures against the DUP for spreading groundless rumors.

“The DUP also defamed the employee and invaded her privacy,” the NIS said. “We will press criminal charges against the DUP and demand compensation.”

The NIS also said the employee never made any postings to criticize Moon and she will cooperate with the legitimate investigation accompanied by warrants by submitting her computer and other data.

The National Election Commission also said yesterday that it found no specific evidence to prove the DUP’s claim.

The Suseo Police Precinct said yesterday that it would file a warrant to confiscate her computer as early as yesterday.

“The DUP said it will present more evidence, so we are waiting for it,” the police said. “We plan to apply for the warrant today, but it may take a longer time.”

The Saenuri Party yesterday condemned the DUP’s actions, calling them a grave infringement upon the rights of the woman. “The DUP members, lawmakers and journalists rushed to her residence and completely violated her human rights,” said Kim Moo-sung, the chief manager of the Park Geun-hye campaign. “Whether she is an NIS worker of not, she is still a citizen of this country. What right does the DUP have to demand to see her personal computer? It must take necessary legal steps.”

“They are even dragging the NIS into this mudslinging,” Park said. “To lay bare the truth, we proposed that the National Election Commission, media, and the ruling and opposition parties all look into the case together, but the DUP rejected it. I am worried about this situation.”

She also said Moon is not qualified to talk about new politics because his party is engaged in obsolete, dirty political tactics.

“If he truly wants new politics, he shouldn’t waste time on negative campaigning,” Park said. “He should use that time to produce a new policy.”

Other Saenuri spokesmen also criticized the DUP for making a groundless accusation for Moon’s victory.

“There is only one week left before the election,” said Representative Cho Hae-jin, a spokesman of the party’s central election committee. “This is a deceptive move and obsolete political maneuver. The DUP and Moon must apologize to the people.”