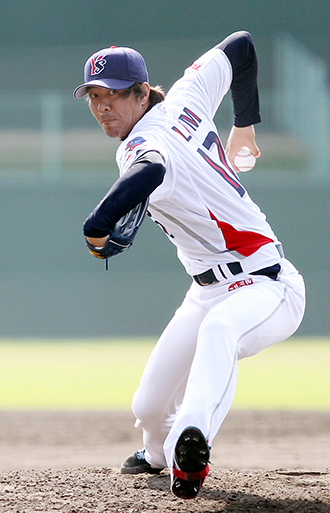 Lim, 36, left for the U.S. yesterday to sign the two-year contract. He said the deal is a split contract worth up to $5 million, with different salary rates for the time he spends in the majors compared to while he is in the minors.

Lim pitched the last five seasons for the Yakult Swallows in the Central League of Nippon Professional Baseball in Japan. He was released by the Tokyo-based team after his injury-plagued 2012 season. He underwent his second Tommy John surgery this year to repair a torn ligament in his right elbow in July and missed the rest of the 2012 season.

The procedure, as well as his age, left Lim’s playing future in doubt this offseason, but he said he was “surprised” to receive offers from about half a dozen clubs from Japan and from the majors, including the Cubs, the Boston Red Sox and the Texas Rangers.

“I am happy that my dream has finally come true,” Lim told reporters at Incheon International Airport.

“I am not getting any younger, and it’s great to have the chance to experience something I never have before. I am going to tackle this challenge head on.”

Lim said he has been rehabbing his elbow for the past month in Korea since his release from the Swallows. Lim is expected to remain out of action until July next year.

“The Cubs expect to see me back on the field in 2014, rather than next year,” Lim said. “Once the deal is signed, I will move to Arizona, where the Cubs operate a rehab center. My goal is to continue to rehab and get back on the mound by mid to late season next year.”

If he reaches the majors, Lim will become the fourth Korean to have played professional baseball in Korea, Japan and the U.S, after pitchers Lee Sang-hoon, Koo Dae-sung and Park Chan-ho.

Park Yoo-hyun, Lim’s agent, said the Cubs have been the most “active” suitor of Lim since September and the team laid out detailed plans to help Lim’s rehab. He also said other teams had offered more money than the Cubs, but the Chicago team said it would put a Korean interpreter and Lim’s personal trainer on the payroll.

Lim left the Samsung Lions of the Korea Baseball Organization after the 2007 season and joined the Tokyo-based Swallows in 2008. He has racked up 128 saves in Japan, the most by a Korean pitcher there, but didn’t record a save in nine appearances this year before coming down with the elbow injury.

After his first Tommy John Surgery in 2005, Lim needed about two years to recover his dominant form that saw him lead the KBO in saves in three different seasons.

While with the Lions, Lim was posted for interested MLB teams in 2002, but only drew a bid of $650,000 and the Lions declined to accept the bid. Lim had repeatedly said his ultimate career goal was to pitch in the majors.

Lim could become the third Korean in the majors in 2013. Outfielder Choo Shin-soo will play for the Cincinnati Reds after a recent trade from the Cleveland Indians. Pitcher Ryu Hyun-jin has signed a six-year, $36 million contract with the Los Angeles Dodgers.

Both the Cubs and the Reds are in the National League Central Division.