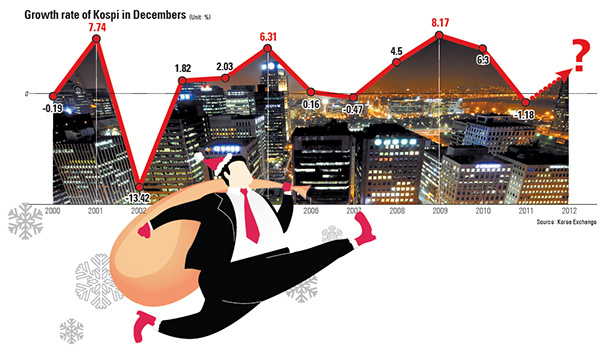 Will Santa Claus give a bag of goodies to the Korean stock market this month?

Just like kids who have sent Santa a list of presents they want, investors are starting to ask whether they will get a Santa Claus rally this year, a frequent phenomenon in the week between Christmas and New Year’s Day.

Investors find the month of December a rally time with people investing their Christmas bonuses or anticipation of the rise in stock prices that often comes in January, the so called January effect.

In fact, the Kospi has surged eight Decembers out of 12 between 2000 and 2011 according to the Korea Exchange.

Although the Kospi had negative growth last December due to the euro zone debt crisis, it was a modest dip of 1.18 percent.

“For this reason, a Santa rally is likely to happen end of the year,” he continued, “in line with dividends payouts, the biggest shopping season in the U.S. and anticipation over next year’s stock market.”

Analysts at local brokerage firms said there are two variables that could stifle a Santa rally: The so-called U.S. fiscal cliff and Korea’s presidential election. 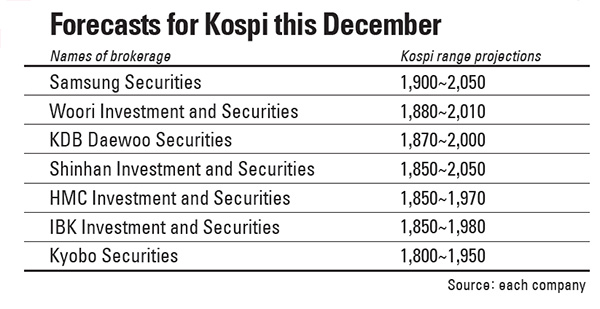 Shinhan Investment and Securities and Samsung Securities estimated the Kospi is highly likely to surge and its index go as high as 2,050 if the fiscal cliff negotiations between U.S. President Barack Obama and Republicans go smoothly by the end of the year.

Woori Investment and Securities projected the Kospi could reach as high as 2,010 this month or stay as low as 1,880.

Other securities firms projected the benchmark Kospi could go between 1,950 and 2,000.

“Brisk year-end shopping, a recovery in the U.S. housing market, and the possibility for solving the fiscal cliff in the U.S. and the Greece bailout are positive signs for stock markets,” said Lee Young-won, an analyst at HMC Investment and Securities. “Global stock markets’ rallies will begin if U.S. fiscal cliff negotiations go well and the parties hammer out a compromise by the end of the year.”

HMC Investment and Securities suggested the Kospi will move in the 1,850 to 1,970 range this month.

Yesterday, the Kospi closed at 2,002.77, up 27.33 points from Wednesday in tandem with the Federal Reserve’s announcement that it will tie low interest rates to the U.S. employment figures. This is the first time in three months that the Kospi broke the 2,000 mark.

Market analysts said Korea’s Dec. 19 election is another key factor to how the market does.

North Korea’s Wednesday rocket launch, which was regarded as an impediment for a Santa Claus rally, didn’t stop the Kospi from rising that day.

“Investors have had enough experience of investment risks posed by North Korea,” Kwak of Samsung Securities said. “Wednesday market, which closed without volatile movements, was proof that the impact on such risks is diminishing.”