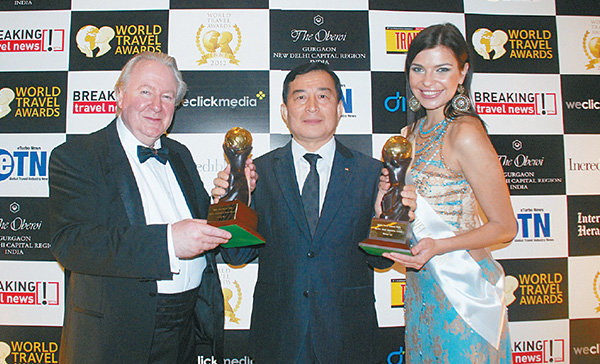 
Korean Air Lines is flying high after winning a number of international awards.

The nation’s top airline said yesterday that it won the “World’s Excellence In Service” category at the World Travel Awards 2012 in New Delhi on Wednesday.

The affiliate of Hanjin Group said this was the first time the airline has won that category of the award, which includes airlines and hotels. It was also selected as the world’s most innovative airline for the second year in a row. 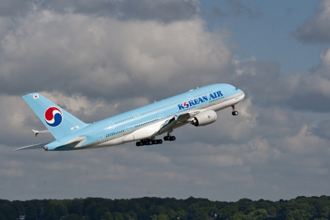 The World Travel Awards, organized by the U.K-based World Travel Group, have been held since 1993 and are known as the Oscars of the tourism industry. The awards are based on votes from people working in the industry.

“Our Korean-style catering, in-flight entertainment system and the celestial bars in our Airbus A380s have earned good grades, while our customer service also has a good reputation,” the company said in a release. “We will keep working to lift our brand as a global premium airline.”

Also on Wednesday, the carrier was named “China’s most beloved foreign airline,” at the 4th Huanqiu Shibao Travel Industry Awards held in Beijing. KAL was chosen along with Singapore Airlines and Emirates.

The Chinese newspaper picks winners in eight different categories for airlines, hotels and resorts based on online votes and in-house opinions. The survey included 20 airlines operating in China.

Industry insiders said that KAL’s aggressive investment in improving service and buying new planes is paying off in awards. The airline has upgraded its in-flight entertainment by introducing Audio Video On Demand service on its A380s and B777-200ER aircraft.

KAL said yesterday it has introduced another Airbus A380 passenger jet, raising its superjumbo fleet to six.

The world’s biggest passenger plane arrived at Incheon International Airport on Tuesday and will be ready to fly this weekend, the company said.