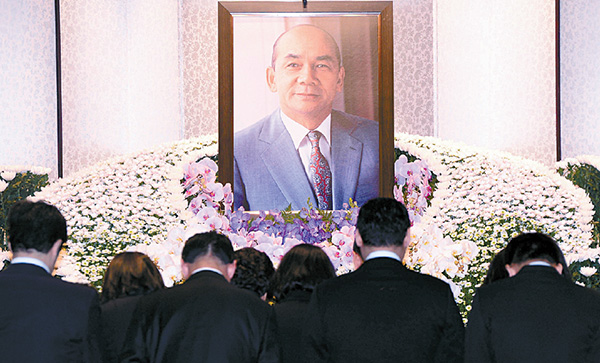 Posco employees and executives pay tribute to founder and honorary chairman Park Tae-joon on the first anniversary of his death yesterday at the steelmaker’s headquarters in Daechi-dong, southern Seoul. Park was 84 when he died. Provided by the company


Posco CEO Chung Joon-yang promised to rebuild Posco as the world’s largest steelmaker by channeling the spirit of its honorary chairman Park Tae-joon at the first anniversary of his death yesterday.

Around 500 executives and employees of Posco and politicians attended the first-year commemoration held at the Seoul National Cemetery in southeastern Seoul yesterday.

“We will rebuild ourselves with the honorary chairman’s indomitable willpower, and try to overcome the current crisis in the steel industry with innovation and creativity,” said Posco CEO Chung. “Posco will cement its status as the world’s top steelmaker.”

Park, known as Korea’s “man of steel,” died of a crippling lung disease at the age of 84 on Dec. 13 last year.

By making Korea a major steel manufacturer, Park became one of the giants of industry with the support of then-President Park Chung Hee.

During Korea’s second five-year economic plan, from 1967-71, Park envisioned an integrated steel mill in Pohang, North Gyeongsang, which he built with the support of the government and Japan.

Under the slogan, “Make steel, serve the country,” Park turned the company into a leading steelmaker in a decade. The steelmaker is credited with helping the country become Asia’s fourth-largest economy, rising from the ashes of the Korean War.

In the wake of the euro zone debt crisis, Posco is currently suffering falling revenues.

The steelmaker failed to maintain its position as a member of the “1 trillion won club” due to worsening market conditions.

The world’s third-largest steelmaker saw its operating profit fall drastically to 819 billion won ($763 million) in the third quarter of this year from 1.1 trillion won in the same period last year.