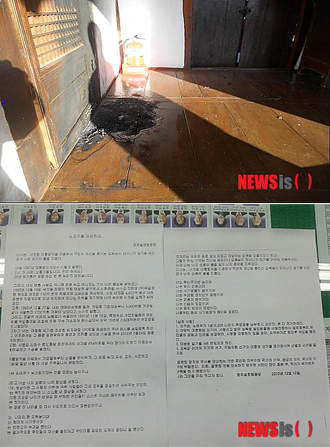 Former President Roh Tae-woo's birthplace house was hit by a small fire that did little damage Thursday, presumed to be triggered by an arson attack, police said.

An unidentified male was caught on CCTV entering the building in the southern city of Daegu around 4:05 a.m., officials said. Soon afterwards, a fire could be seen inside the house.

The outbreak of the suspected arson attack has left a trail of smoldering debris inside but no casualties were reported, they said.

A letter was also left at the scene, claiming that Roh should be punished, officials said.

"(I) set the birthplace house on fire, wishing that the thieves, who steal people's assets by abusing the presidency, would not be born again," according to the letter released by the officials.

Police investigators said they will further look into details of the incident and pursue the man caught in the CCTV footage.