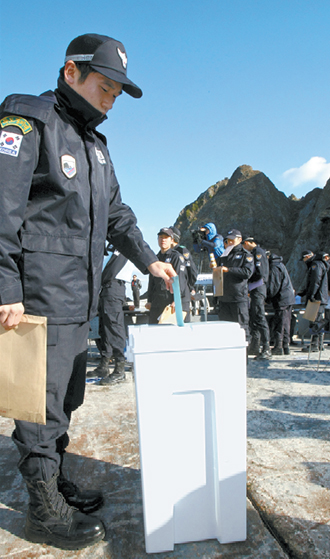 With six days left before the election, presidential front-runner Park Geun-hye tried to keep her lead in an increasingly tighter race as liberal contender Moon Jae-in stepped up his game.

In the latest JoongAng Ilbo survey, which took place on Tuesday and Wednesday, the Saenuri Party’s Park recorded 48 percent of support while Moon of the Democratic United Party came in second with 41.2 percent.

The poll of 2,000 voters was the 15th in a series. It was the last survey that was allowed to be made public under the election law, which bars the media from releasing any updated figures from polls taken after Wednesday.

In the latest survey, Lee Jung-hee of the Unified Progressive Party scored 1.3 percent, while the remaining four independent candidates together brought in 0.6 percent.

The other 8.9 percent said they were undecided or gave no response.

While Park kept her lead, it was clear that Moon had narrowed the gap.

The 11.1 percentage-point gap, however, went down to 6.8 percentage points in this week’s poll.

Other surveys also put Park in the lead, but the gap between the two front-runners varied.

In past elections, Seoul has been the battleground because its voters are from towns around the country and it has the largest number of voters. 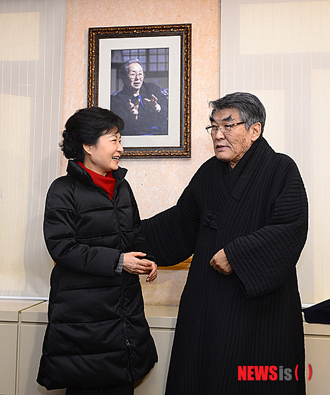 
In the 2007 presidential election, Lee Myung-bak won 53.2 percent in Seoul, while Chung Dong-young only won 24.5 percent of the capital city.


In the latest JoongAng Ilbo survey, Park and Moon were neck and neck in Seoul. Park scored 45.2 percent, while Moon earned 43.3 percent and Park’s lead was within the 4.4 percentage point margin of error.


In another battleground region of Daejeon and Chungcheong, Park scored 55.3 percent while Moon earned 35.6 percent.


The generational divide was also clear among voters.


Those in their 20s and 30s support Moon, while Park was ahead among voters over 50.

Voters in their 40s emerged to have decisive power, and Park scored 46.6 percent among them, 6 percentage points ahead of Moon’s 40.6 percent.

While voters will be left in the dark
about poll outcomes for the next six days, absentee voting started yesterday around the nation.

According to the National Election Commission, more than 1.08 million people registered for the two-day absentee voting, which will end today.

The number of registered absentee voters is the largest ever. It was up by 33.9 percent from 2007.

Absentee voting also emerged as a last-minute factor in the race as it takes place in the aftermath of North Korea’s long-range rocket launch.

About half of the absentee voters - 560,000 - are service members of the military and police, and they are known to respond sensitively to a security issue.

“North Korea, once again, betrayed our trust,” she said while stumping in Uijeongbu, Gyeonggi.

“I will teach a clear lesson to the North that it won’t gain anything from provocations.”

“We must teach the North clearly that it has nothing to gain from its action,” Park said.

“And I will also take a step further. I will teach the North how it can restore trust and what it will gain by keeping promises.”

She also attacked her liberal rival Moon for having an “ambiguous stance” on national security.

“They said the Cheonan just sank, that it wasn’t torpedoed, and demanded a new probe,” Park said.

“They also spoke ambiguously on the Northern Limit Line. How can we allow those people to run our country?”

Later in the afternoon, Park visited Gangwon and meet with Kim Chi-ha, a dissident poet who fought against the authoritarian regime of Park’s father, Park Chung Hee.

During the strongman’s rule, Kim was tried and sentenced to death, which was later reduced to life imprisonment and eventual release following an outcry both at home and abroad.

To the liberals’ surprise, Kim announced his support for Park last month, and yesterday’s meeting was their first encounter since the poet’s endorsement.

Earlier in the day, Moon also promised to create 400,000 new jobs in the public service sector and add 20 trillion won ($18.7 billion) to next year’s budget for employment and welfare.