The 10 surveys taken from Sunday through Wednesday showed Park's approval rating between 42.8 percent and 48.9 percent, compared to 41.2 percent to 47.5 percent for the Democratic United Party (DUP) candidate.

Among the surveys released by broadcasters KBS, SBS, MBN, JTBC and Channel A as well as the dailies JoongAng Ilbo, Donga llbo, Munwha Ilbo, Seoul Shinmun and the regional newspaper association, Park was ahead 0.5-6.8 parentage points with less than a week to go before the Dec. 19 poll.

Under the country's election law, no survey taken after Wednesday can be released to the public, although polls can be taken without the results being publicized. 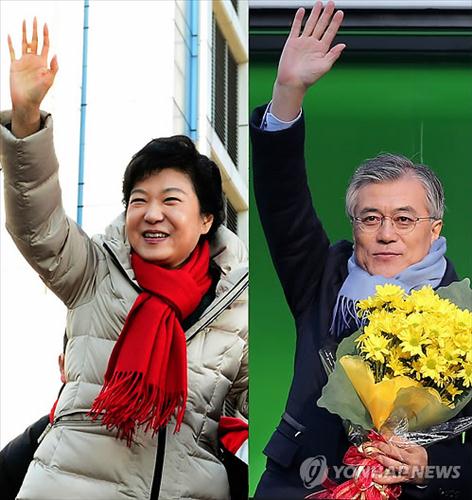 "Of the total surveys released, Park's exceeded the margin of error in three while in the rest, she held a narrow lead, making the final outcome hard to predict at present," a political observer said. He, however, said the fact she has persistently stayed ahead since the start of campaigning on Nov. 27 may be a sign the 60-year-old holds a slight advantage in the final stretch of the race.

The final polls have become important because numbers taken the week before the election in 2002 and 2007 reflected the final outcome. In 2002, liberal candidate Roh Moo-hyun beat conservative contender Lee Hoi-chang, while five years later Lee Myung-bak of the Grand National Party (GNP) secured a landslide victory over Chung Dong-young of the United New Democratic Party (UNDP). Roh and GNP's Lee were ahead in the last polls released. The GNP and UNDP are predecessors to the current Saenuri Party and DUP.

In the KBS survey carried out on 2,500 people on Tuesday and Wednesday, Park was ahead 3.5 percentage points with her approval rating hitting 44.9 percent to Moon's 41.4 percent.

MBN's poll conducted on 1,000 voters on Monday had the conservative candidate leading by 3.4 percentage points, while the JTBC and Munwha surveys that covered roughly the same polling period as KBS and MBN, revealed Moon trailing by just 0.5-0.9 percentage points.

Other findings by Donga and Channel A, based on replies from 1,000 people showed the conservative candidate ahead by 3.9 percent and 2.9 percent, respectively, with the poll by Seoul Shinmun showing a 2.3 percentage point gap between the frontrunner and Moon.

The SBS, JoongAng and the regional newspaper association tallies, on the other hand, showed Saenuri's Park ahead by over 6.0-6.8 percentage points.

The SBS poll taken from Monday through Wednesday on 3,000 voters and showed Park leading by 6.8 percentage points, which is beyond the 1.8 percentage point margin of error. In that survey, the Saenuri candidate's rating reached 48.9 percent vis-a-vis 42.1 percent for the DUP standard bearer.

In a survey conducted jointly by regional newspapers with the help of Gallup Korea and the independent JoongAng poll, Park was ahead by 6.0 percentage points and 6.8 percentage points, each.

Related to the polls, Saenuri campaign officials said that with 5-10 percent of all voters remaining undecided, they remain cautious about the results, yet predicted that Park will eventually win.

Rep. Lee Sang-il, the party's spokesman, said despite the slight edge, everyone is on guard until the last vote has been cast.

The conservative party added that while there has been some erosion in Park's lead since onetime independent candidate Ahn Cheol-soo threw his support behind Moon, the situation has stabilized overall.

The DUP, on the other hand, said Moon has done a good job in reducing the gap, and expressed confidence that the liberal candidate may overtake Park by the weekend.
Pollsters such as Yoon Hee-woong, chief analyst at the Korea Society Opinion Institute, said that the final polls will likely be used as key reference data by voters.

"Depending on how people perceive the numbers, these last surveys can trigger a bandwagon effect with people casting votes for the likely victor, or generate sympathy for the underdog candidate, if the race is very close," he said.

Others said that the last surveys will have to be examined carefully particularly since there are some noticeable differences in numbers among voters in their 40s and those living in and around Seoul that make up roughly half of all voters in the country.

People in their 40s represent the largest single age group of voters and are more "neutral" in their preference than the younger and older generations. People in their 20s-30s are more liberal, while those over 50 tend to be conservative.

Survey firms, meanwhile, said that because the race is close, the final results may be determined by turnout and how undecided voters cast their ballots.

A survey carried out by Korea Research Center on behalf of the National Election Commission (NEC) on 1,500 people nationwide late last week showed 79.9 percent of all respondents saying they will definitely vote in the presidential race.

If the prediction is true, this translates into close to 32 million of the 40 million eligible voters voting on election day. The NEC said the turnout forecast this year is 12.9 percentage points higher than numbers predicted ahead of the 2007 presidential race. In that race, 67 percent of all people polled said they would vote with the actual turnout hitting 63 percent. (Yonhap)