Satellite is circling the Earth: Seoul

Satellite is circling the Earth: Seoul 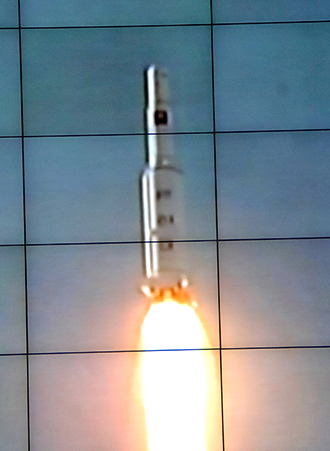 North Korea’s satellite delivered by its long-range rocket was circling the Earth with an orbital period of 95.4 minutes, the South’s Ministry of National Defense said yesterday, but it was not yet known whether it was functioning properly.

A day after the communist state’s successful, surprising multistage rocket launch, the Defense Ministry acknowledged that the Kwangmyongsong-3 satellite was circling the Earth at a speed of 7.6 kilometers per second (4.7 miles per second), with the oval radius spanning 500-588 kilometers, citing data by the North American Aerospace Defense Command.

“It is not yet known what kind of mission the satellite is conducting,” the ministry spokesman Kim Min-seok said in a briefing. “It usually takes two weeks to evaluate whether a satellite is successful. For the time being, it is working normally.”

Although the communist state claims Wednesday’s launch was meant to send a peaceful satellite into space, the South Korean government sees it as a covert test for ballistic missile technology and the launch means a step closer to perfecting its intercontinental ballistic missile, Kim said.

The three-stage rocket has an estimated range of 10,000 kilometers, Kim said, which can fly over the Pacific Ocean to hit the U.S. “If the North replaces the satellite with a nuclear warhead, it could turn into an intercontinental ballistic missile,” Kim said.

Since Pyongyang has tested two nuclear devices since 2006, it has been upgrading its atomic technology to conduct another test “when time is ready,” he said.

The South Korean military has deployed Aegis warships and minesweeping ships in the western sea to search for the debris, but the government has no plan to disclose the details, citing military information, officials said.