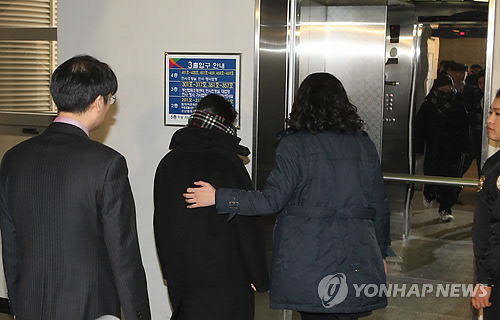 BUSAN - A court acquitted a 37-year-old former prosecutor surnamed Lee who was accused of taking a Mercedes-Benz sedan and expensive designer goods from a 50-year-old prosecutor-turned-lawyer surnamed Choi to sway a lawsuit in his favor.

In 2007, Lee and Choi were introduced by one of Choi’s acquaintances.

The two then had a romantic relationship until November 2011.

In December last year, a college lecturer, whose surname is also Lee and was also a lover of Choi, reported the case to prosecutors in an apparent effort to force him to end the relationship with the prosecutor.

According to prosecutors, Lee allegedly received: a Mercedes-Benz sedan; a corporate credit card; a Chanel handbag worth 5.4 million won ($4,677); a 30-million won diamond ring; a 26.5-million won Cartier watch; two fur coats worth 16.5 million won, and 6 million won in golf clubs in return for asking her colleague in Changwon, South Gyeongsang, to consider a lawsuit in Choi’s favor.

Choi had sued two former partners involved in a construction project in China. In the first trial, Lee was sentenced to three year in prison and was also ordered to pay 44.62 million won in fines.

“It is clear that Lee charged more than 23 million won on the credit card and also used the Benz sedan for about two years in return for exercising her influence for Choi,” the court said in the first trial.

The Busan High Court that ran the appeal trial yesterday, however, reversed the original judgment, acquitting her of the bribery charge.

“We also judged that Choi has asked Lee to use her power in his case,” senior judge Kim Hyung-chun said in the ruling. “But it isn’t clear that the gifts Choi gave to Lee were bribes when we reviewed the time period that the gifts were given because she kept the car and credit card after she made a request to her colleague. We also judged that the Mercedes sedan was given to Lee as a love token that Choi, who had many women in his life, as a promise to her that he won’t see any other women.”

Lee asked her colleague to consider Choi’s case in September 2010. Lee drove the Mercedes from April 2009 to May last year.

“We can’t understand the court’s judgment,” Roh Seung-kwon, senior prosecutor from the Busan District Prosecutors Office said. “We will bring the case to the Supreme Court.”