NIS worker gives up computers, fires back at DUP

NIS worker gives up computers, fires back at DUP 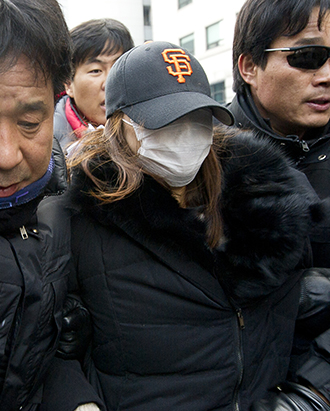 The female employee of the National Intelligence Service in question leaves her home in a hurry under the protection of NIS workers. [YONHAP]

The female employee of the nation’s top spy agency accused of posting slanderous remarks against the main opposition presidential candidate on the Internet yesterday filed charges against Democratic United Party officials for dissemination of private information, trespassing and involuntary confinement.

This is following the DUP filing charges against the National Intelligence Service for violating election law the previous day. They accused the NIS of directing a smear campaign against presidential contender Moon Jae-in.

After three days of confinement in her home as DUP members and reporters camped outside her room at an officetel in Gangnam District, southern Seoul, the 28-year-old NIS employee surnamed Kim escaped from the apartment and voluntarily handed over her computers to the police yesterday.

On Tuesday, the opposition DUP stated a female employee of the NIS made a series of Internet postings criticizing Moon.

The DUP identified the suspect involved in the election law violation as Kim of the intelligence service’s psychological operation bureau and made a report to the police and the National Election Commission, accusing the NIS of intervening in the presidential election to hurt its candidate.

The DUP requested Kim reveal her IP address and where she worked, and hand over her hard drive, laptop and smartphone, which Kim initially resisted. Because DUP members and reporters were camped in the hallway outside her door, Kim was confined to her residence.

Kim yesterday voluntarily submitted one desktop and one laptop in the presence of her attorney to officials from the Seoul Suseo Police and the National Election Commission at her home in Yeoksam-dong, southern Seoul.

She did not submit her phone, stating “NIS officials don’t use smartphones.” Since being trapped in her officetel since Tuesday evening, Kim was finally escorted from her home at 2:50 p.m. yesterday, escaping the eyes of reporters when they were distracted by the police taking her hard drive.

Police said that the desktop and laptop will be analyzed by its digital forensic team over several days.

The police further requested that Kim answer charges of violating election law and testify as a defendant, but Kim refused for health reasons.

Her attorney stated, “Kim’s health is fairly poor, and she is psychologically unstable so she is not in a state to testify right away.”

Kim’s 58-year-old father stated, “Though my daughter is suspected of writing posts critical of candidate Moon Jae-in, now I feel like I want to write them myself.”

Kim had not eaten for two days because of digestive problems caused by stress.