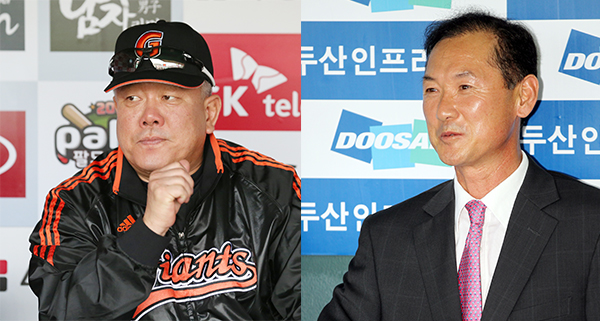 
One former and one current manager of the country’s top two university baseball teams’ were arrested on charges of receiving kickbacks in exchange for getting kids into school.

The Incheon District Prosecutors’ Office received an arrest warrant to detain Yang Seung-ho, 52, former manager of the Lotte Giants, for receiving kickbacks from parents when he was the manager of Korea University between 2007 and 2010, as well as Jeong Jin-ho, 56, current manager of Yonsei University’s baseball team, on the same charge after they made two swift arrests Tuesday.

The prosecutors suspect that Yang has received about 100 million won ($93,300) in kickbacks from parents and high school coaches. Jeong is also suspected of receiving tens of millions of won in kickbacks since 2010. Yang and Jeong worked together as coaches of the LG Twins in 2006.

The prosecutors said they found the irregularities when they were investigating the college admissions of Incheon’s high school athletes.

In baseball, usually players who weren’t drafted by the country’s professional teams go to university teams.

The prosecution judged that former and active professional managers, coaches and players have been involved in similar actions.

The prosecution has indicted a total of 11 people: four university managers and coaches in Seoul and Busan; two high school baseball team managers in Incheon; one umpire from the Korea Baseball Association and four high school players’ parents.

It added that some professional baseball players-turned-school coaches include a 42-year-old manager for a high school baseball team in Incheon. The prosecution said the manager was an All-Star-level pitcher for a KBO team.

There are unverified rumors that the Lotte Giants fired Yang as they were already aware of Yang’s irregularities.

Yang successfully advanced the team to the playoff series in the last two years though he didn’t have the team’s two best players, including Lee Dae-ho who won the battling title in 2010 with 44 home runs and 133 RBI and left-handed ace pitcher Jang Won-Joon, who went 15W-6L with a 3.14 ERA in 2011.

Lee went to the Orix Buffaloes in the Japanese league and Jang left the team for military service duty in 2012.

“We knew nothing about Yang’s irregularities,” Bae Jae-hoo, the general manager of the Giants told reporters, denying the rumors.

The prosecution said it has obtained additional intelligence that other university baseball team managers have received kickbacks from parents and high school coaches.

It said that former and incumbent managers of KBO teams are subject to investigation.