Three out of four businesses plan no new investments next year due to lousy business conditions.

According to a survey of the country’s top 30 business groups conducted by the JoongAng Ilbo this week, 22, or 73 percent, of the surveyed groups have no plans to start new businesses.

Sixteen out of the 30 groups predicted that similar amounts of investments will be made next year compared to this year.

A mere six groups said they are willing to increase investments.

Most of the groups intend to cut back on facility investments.

STX Group plans to reduce its facility investment by 10 to 20 percent next year. The group announced Wednesday it will sell STX Pan Ocean, a key shipping affiliate, as part of its efforts to improve its finances.

Among the six groups with plans to increase investments next year, Hyundai Motor Group said it will ramp up R&D investments by 10 to 20 percent.

According to the report, General Motors, Toyota and Honda cut back on R&D investments in the wake of the 2008 financial crisis. Hyundai Motor and Kia Motors didn’t. As a result, Hyundai and Kia are the only players that saw their market shares grow in the U.S. during the period between 2007 and 2011.

LS Group, spun off from LG Group in 2003, has been making investments in the so-called smart grid. The group said in the survey that it will continue investing in the area next year.

Of the 30 groups surveyed, 25, or 83 percent, said they are not going to hire more employees than this year. Two said they will hire fewer.

As for starting new businesses, 22 said they have no plans at all.

“Even though we want to add a new business to our profile, we don’t know what would be safe in a period full of uncertainties,” said a spokesperson of one of the groups. 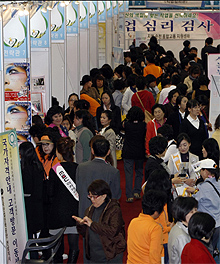 The eight groups with plans for new businesses said they are interested in renewable energy, power generation and health care.

Of the respondents, 40 percent said the global economy would start recovering in the second half of next year at the earliest.

Another 27 percent put off their expectations until the first half of 2014. A final 20 percent didn’t expect recovery until 2015.

The groups didn’t show high expectations on improvements in government incentives for investments, even with a new government coming next year. Seventy percent said there will be not much difference from this year, while 23 percent expected worse conditions than this year. Meanwhile, according to statistics by the Bank of Korea yesterday, local businesses tried to expand their capital funding in the third quarter in a bid to brace against possible setbacks in their businesses.