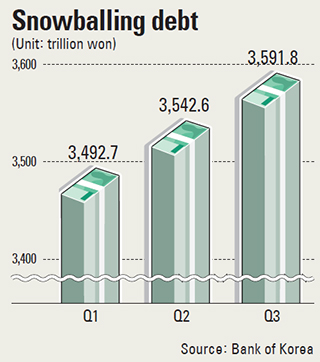 Debt owed by households, non-financial companies and the government continued to grow and edged close to 3,600 trillion won ($3.4 trillion), which is three times the size of the nation’s GDP last year.

According to the Bank of Korea yesterday, accumulated debts owned by households, companies including nonprofit organizations and the government amounted to 3,591.8 trillion won as of the third quarter. This is 49.2 trillion won more than the previous quarter. It was three times the size of last year’s GDP, which was 1,237.1 trillion won.

The nation’s combined debt until the first quarter of 2005 was twice the size of the nation’s GDP.

By sector, debt of non-financial companies grew the largest: it added 31.8 trillion won compared to the previous quarter. The combined debts of nonprofit organizations and households grew 14 trillion won from the second quarter to 1,135.4 trillion won. Government debt was 3.4 trillion won larger than in the April-June period. 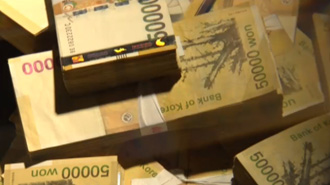 The government has been trying to decelerate the growth of household loans as it continues to break new records, amounting to 937.5 trillion won as of the end of September.

Thanks to the increased assets, the nation’s capacity to repay debt rose to the highest level in a year and a half.

The ratio of financial assets held by households and nonprofit organizations to debt, a gauge of their capacity to repay debt, came in at 2.16 in the July-September period, up from 2.13 the previous quarter.

The latest figure marks the highest reached since the first quarter of last year, when it came to 2.17, it added.

The central bank also added that between July and September more than 10 trillion won of investment from overseas entered the local stock market as the nation’s credit rating was improved.