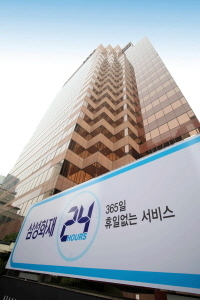 Samsung Fire & Marine Insurance Co., the country's top non-life insurer, has recently implemented a voluntary retirement program and dismissed around 150 workers. Samsung Fire has enforced the program annually since 2009, according to the sources.

The move comes as the lack of viable high-yield investment options amid volatile market conditions have weighed down on the firm's asset management returns.

Samsung Card Co., the country's No. 2 industry player, recently cut some 100 workers to tide over the economic slump, which has dented local credit card firms' earnings, the sources said.

The average commission rate for merchants with annual sales of less than 200 million won (US$186,200) was lowered to 1.5 percent from the previous 1.8 percent in September, according to the Credit Finance Association.

Other financial arms of the leading business group such as Samsung Securities Co. and Samsung Asset Management Co. also plan to reduce their workforce via similar measures, according to the sources.

Meanwhile, Samsung Life Insurance Co., South Korea's top life insurer, said it will focus on tapping overseas markets instead of reducing its workforce in an effort to boost its sales. (Yonhap)