Models pose inside the Suanbo Park Hotel spa in Chungju, North Chungcheong. The spas in Suanbo are called “royal spas,” which stems from the historical records that the kings of the Joseon Dynasty were healed of skin diseases in the there. By Shin Dong-yeon


This winter appears to be a cold, long-lasting one, but there are still chances to play in water even when there’s ice outside.

In this weekend section, the JoongAng Ilbo introduces hot, entertaining spots where you can soak cold, old bones.

There are traditional hot springs, such as Suanbo spas in Chungju, North Chungcheong, and Baekam Spa in Uljin, North Jeolla. Seorak Waterpia in Sokcho, Gangwon, and Resom Spa Castle in Yesan, South Jeolla, among others, offer a fusion experience with quality water and facilities that have earned the government designation of “Recuperation Spa.”

Some of the state-of-the-art water parks in and around Seoul, such as Caribbean Bay, provide young people with entertaining experiences all year round.

If traveling to out-of-town water parks or spas sounds like too much trouble, jjimjilbang in the metropolitan area might be a good alternative. 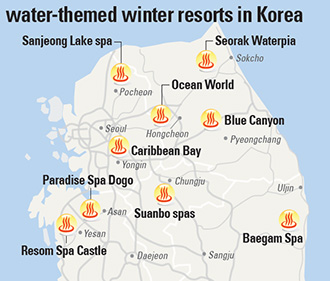 When Korea was less affluent and newlyweds had little money for overseas honeymoons, many went to the spas. Back then, there were famous spas and some of them are still thriving, attracting many of people from the old generations to revisit their cherished memories of the places.

Suanbo, a town in Chungju, hosts what are called royal spas. The Annals of the Joseon Dynasty (1392 ?1897) record that dynasty founder Lee Seong-gye and Sukjong, the 19th king in the dynasty, healed their diseases in these spas. They are known to be particularly effective for skin diseases.

An Chan-ho, 53, general manager of the Suanbo Park Hotel, which has one of the spas in the region, claims that a leper in North Gyeongbuk was healed after 15 days in a Suanbo spa.

The hot springs here declined in popularity in the 1990s, but the trend has reversed over several years amid a growing interest in well-being.

Scores of hot springs are open throughout the region, but all are using the same quality of alkalescent water equally distributed by the city government of Chungju. The water in the spas is adjusted to 53 degrees Celsius (127.4 degrees Fahrenheit).

At Suanbo Park Hotel spa, the visitors will enjoy a nice view of the snow-covered peak of Mount Weorak.

This spa located in Uljin, North Gyeongsang, may be less equipped and developed and is far away from Seoul, but still is considered by some as one of the best places to send your parents to fulfill the duty of filial piety. It used to be a sulfur hot spring, but there is no sulfur anymore. Still, “the skin becomes softer than getting soaked in milk,” says Lee Jin-ho, a manager of the Hanwha Resort, which operates the spa.

Pocheon is a hot spring cluster that also accommodates well-known spas such as Ildong and Sinbuk. Sanjeong Lake spa boasts beautiful scenery that few other spas in the region can match. The spa is within a resort located on the shores of a large lake. The lake has many other activities in winter, such as sledding and skating. Mount Myeongseong, known for its silver grass, rises above the lake, providing a nice hiking trail. The water contains a great amount of sodium bicarbonate and is alkalescent, meaning you don’t have to use soap to wash.

Fusion spas are facilities that started out as spas but grew into full-service water resorts that offer fun for the whole family, and they are emerging as a popular vacation destination. Among the fusion spas, those equipped with a certain quality of water and facilities are approved by the government as “Recuperation Spas.” 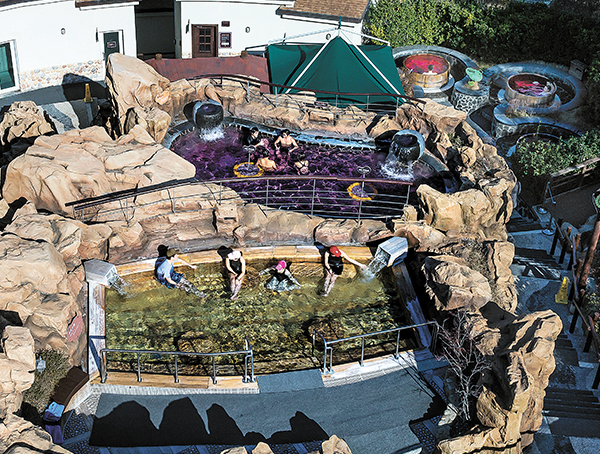 Seorak Waterpia is a designated “Recuperation Spa,” which started out as a traditional spa but has developed into a comprehensive water park.

This is the prototype of the fusion spa. It became the first spa designated as a “Recuperation Spa” in 2009. The spa has such interior facilities as a dream bath and neck shower. On the outside, there are more than 10 spas, including Wood Spa, Air Spa, Rain Spa and Well-being Spa.

Picturesque Mount Seorak can be seen from the spas.

This spa uses a hot spring containing germanium, an element said to help prevent aging by providing the skin with oxygen. The water temperature is maintained at 35-37 degrees Celsius year round.

The spa has an indoor pool, where people can receive 29 treatments using hydraulic pressure. There are more than 20 outdoor spas with such interesting names as Jazz and Apple Wine. Children can enjoy several pools, including a wave pool.

In this spa, you need to double- check whether you are going in the right gate. The spa shifts the men’s spa with the women’s spa every day for a “yin-yang” adjustment, as officials of the company put it. It has various outdoor baths, including green tea, mugwort, coffee, lemon and pomegranate. Some other baths are named after the oriental medicines they contain, such as ginseng and danggui (Korean angelica). There is an outdoor pool and a variety of therapy services available. Water temperature is maintained at 35 degrees Celsius.

From left: Rafting is one of the activities available even in winter at the Resom Spa Castle.;Visitors enjoy hot water in an outdoor pool at the Caribbean Bay. By Shin Dong-yeon

Korea’s water parks are also attracting visitors during the winter. According to the major parks, an average of 3,000 people visit the parks each winter weekend, which is less than the summer peak but still enough to turn a profit.

The Aquatic Center in this resort is one of the hottest places for lovers in the metropolitan area. It is known for many entertaining facilities. The Spa Village on the sixth floor of the center is a private space that can be rented by families and couples. The village is equipped with a physical therapy room and cosmetics rooms.

This spa complex contains 39 baths and other water entertainment facilities. It is located in Phoenix Park, a well-known ski resort. There are various hydrotherapy devices that are helpful for easing sore muscles after a long day of skiing. A snow-covered slope is seen from several of the baths.

One of the most popular water parks in Korea, this resort boasts a variety of sauna facilities. An open-air bath called Hanbang (which can be translated as Chinese medicine) provides water boiled with more than 10 Chinese herbal medicines.

From left: A bath called the “Event Spa” at the Blue Canyon creates various effects.;Foreign visitors rest at the Dragon Hill Spa, one of the most famous jjimjilbang in Seoul.

Jjimjilbang, a Korean style sauna that began to appear in Korea in the 1990s, is no longer a place for ajumma. It is a respite for many company workers in urban areas who are too busy to vacation in remote areas. Winter, in particular, is a time for everybody willing to take pleasure in soaking the body in hot waters or relaxing in saunas that are nearby and inexpensive. It would be typical to see people in suits and neckties, young lovers and families to emerge from a jjimjilbang after nine o’clock at night.

Here are six well-known jjimjilbang in and around Seoul.

This seven-story jjimjilbang, located next to the Yongsan subway station, has been mentioned in several international media outlets such as the New York Times and CNN. A 29-year-old American woman who came to the spa for the fifth time recently said she liked the place because she could swim and enter the sauna. Apart from sauna facilities, the spa has an all-year outdoor pool, video arcade, noraebang and small theater.

The jjimjilbang, located on the 10th and 11th floors of this large shopping mall, is decorated in Roman style with high ceilings and many of the saunas brightly illuminated. One of the saunas, the atopy treatment room, had its interior of wood and is good for children with atopy dermatitis, according to the owners. The spa also provides free stretching and yoga classes at 2 p.m. on weekdays.

This spa holds many entertainment programs and events that visitors can enjoy in addition to saunas, such as singing, drawing caricatures and a bubble show. Employees also offer instruction on the best ways to bathe on Saturdays. It has a sulfur bath, a rarity for a jjimjilbang in the city.

Spa Lei is only open to women and was introduced as one of Seoul’s representative jjimjilbang by Lonely Planet, which called it “a luxurious spa providing excellent services in an immaculate, stylish environment.”

Several cosmetic services are available, such as tanning and anti-aging skin care. A seawater bath, which uses water brought in from the sea off of Incheon each week, and an outdoor bath on the rooftop are among the favorite parts of the spa.

This resort is located on Mount. Dobi, a 352-meter mountain brimming with pine trees. The spa uses a lot of wood in its decoration. Salt baths and red clay baths are among the most popular features.

Some Korean dramas such as “Lovers in Paris” and “Goodbye My Princess” were filmed here, so Hallyu fans from other Asian countries are frequent visitors.