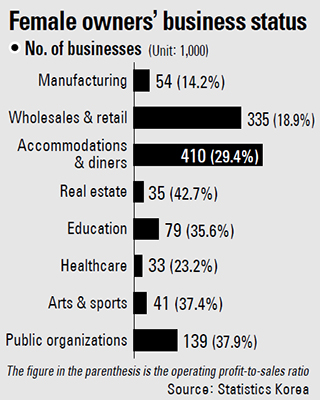 It turned out that female business owners outperform their male counterparts in running businesses in some particular areas, a government report said yesterday.

Businesses led by self-employed women recorded 23.5 percent in operating profit-to-sales ratio, higher than the average 20.3 percent of businesses operated by men. Women operate smaller businesses than men in terms of sales and size of employment. They hire 2.2 employees on average and obtain 107 million won ($99,596) in annual sales. The figures are lower than the average of 2.47 employees at businesses run by men, and 170 million won in annual sales. 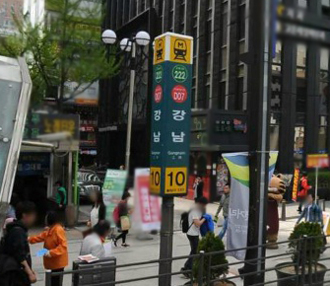 It turned out that women are excelling especially in providing services as they run beauty shops and laundry shops.

In these areas, shops run by women achieved 37.9 percent in the operating profit-to-sales ratio, far higher than 31.7 percent of similar shops led by men. In the retail business, women also had higher profitability with 18.9 percent. They are also doing well in the real estate and education fields, the report said.

However, self-employed women are still behind men in the transportation and health care fields.

While men reach 41.9 percent in sales-to-operating profit as they work as taxi or bus drivers, women get only 32.1 percent.

In the health care industry, women receive smaller profits than men do, with 23.2 percent in sales-to-operating profit ratio, far below 27.3 percent achieved by men.

In the law, insurance and science fields, women also fall behind men, the report said.