K3 hits on all cylinders if you pony u

K3 hits on all cylinders if you pony u 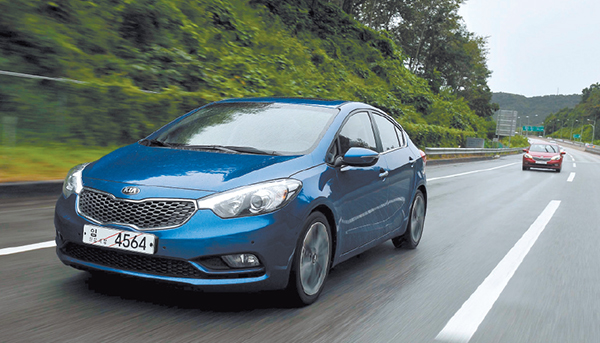 Kia Motors’ K3 was the most anticipated car for the second half of this year. The company invested 300 billion won ($279 million) in the model for 42 months since 2009.

K3, the successor of the Forte, was released in mid-September, but I finally got a chance to drive this compact-sized car just two weeks ago after hearing a lot of buzz about it.

The K3 deserves to be mentioned as the completion of Kia’s K-Series (the three “Ks” stand for Korea, Kinetic and the Greek word “Kratos”) lineup.

Although the smallest among the K-Series cars, it succeeds in style and comfort.

The exterior design of K3 was made with the concept of “Dynamic Muscularity,” according to Kia.

Although I don’t see much muscularity in its design, I can agree that Kia has tried to make the vehicle dynamic. Looking from the side, it follows the trend of an upward shoulder line with smooth curves.

The “cab forward” style, which pushes the meeting point of the A-pillar and hood more to the front, allows for more room inside and the extension of the C-pillar to the back gives it a coupe-styling. 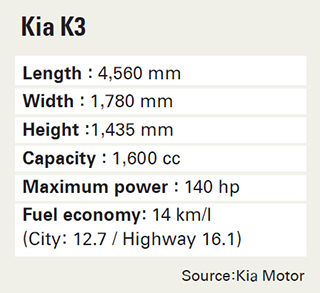 Even though I felt that the front grill was slightly large considering the overall size of the car, it is representative of the Kia brand.

However, the design of the tail lamps was a little disappointing as they lack sharpness compared to other K-Series models.

At nighttime, when these LED lamps shine, it gives the vehicle a very stylish look, reminiscent of a BMW.

As I opened the door and sat on the driver seat, I could see why this car surprised so many people.

Simply, I was amazed by all the luxury features.

My test model was the highest-end (the K3 comes in five trims), and some of the features made me wonder if it really was a compact car.

This K3 had an electric memory seat on the driver’s side, automatically adjusting to my preferred seat settings. It also had seat cooling and heating.

During this cold season, many drivers would also find useful the heated steering wheel system and auto defog system on the front mirrors.

There is also a cooling system in the glove compartment, which keeps your beverage cold. For parking novices, it is equipped with a smart parking assistant system with a rearview camera.

If you consider Kia’s in-car infotainment system UVO, short for “your voice,” where you can use your smartphone to control some features remotely, the convenient and safe features place the vehicle as the best among local rivals.

As for performance, don’t let the fact that the K3 shares the same platform and engine (1.6-liter GDI) with Hyundai Motor’s Avante fool you. The K3 offers a much more sporty drive than its older brother Avante.

The flex steering wheel comes in three modes - comfort, normal and sports. But the steering in sports mode might be too stiff for some drivers.

If you want speed, the car can get up to 190 kilometers per hour (118 miles per hour) with steady acceleration, but gets a little shaky if you go any faster.

The K3 comes with a six-speed automatic transmission, but drivers can use paddle shifters behind the steering wheel to add some fun.

Even with the car in drive, hitting the shifters will instantly convert the car to manual.

While the K3 looks like a nearly perfect car, the critical disadvantage is that some of these features are only available in higher-end models. You get what you pay for.

For example, to install the UVO system on its navigation system, people need to pay an additional 500,000 won.

So before buying this car, consumers have to find out what features they want to include in their vehicles. This might be a headache as prices vary.

The lowest-end model starts at 13.45 million won, but if you go for all the luxury options, the price can be as much as 23.4 million won.