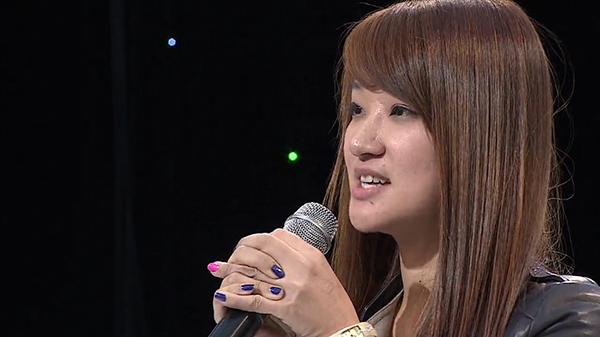 Shannon Heit did not advance to the next round on “K-pop Star,” but the 30-year-old adoptee accomplished what she wanted to: getting the message out about her search for her biological mother. [JoongAng Ilbo]

Yet despite her heartfelt rendition of Alicia Keys’ best-loved ballad, Shannon Heit failed to move to the next round.

Yang Hyun-suk of YG Entertainment, a judge on the SBS show, delivered the bad news.

But his voice took on a different tone as he went to say, “I hope you won’t lose courage and will soldier on to find that person.”

Yang was referring to Heit’s search for the Korean woman who had given her and her twin sister up for adoption when they were 4 years old.

Heit’s search for her roots began five years ago, and “K-pop Star” made it widely known. Still, Heit’s only clue is her birth date: March 20, 1982.

That and her Korean name, Jung Doo-na (her sister is called Ha-na, the names denoting one and two), but even the adoption agency that looked after the twins isn’t sure of the names.

After an American soldier based in Korea and his wife adopted them, the twins went to the United States at the age of five.

Despite being brought up in one of the world’s wealthiest nations with three siblings in addition to her twin sister, something was missing.

“During middle school, a friend of mine started calling me ‘Charlie,’?” said Heit. “I didn’t know what they meant, so I looked it up and learned it was a derogatory term for North Vietnamese during the war.”

In 2007, Heit turned 25 and was working in a well-paid job, seemingly living a good life. Still, there was a restlessness, and she began thinking about Korea.

“At first, I wanted to find out more about the country,” said Heit, who came on vacation and never left.

She has been deeply involved in humanitarian work, from translating the stories of “comfort women,” Koreans forced into sex slavery by the Japanese during World War II, at a facility in Gwangju, Gyeonggi, to helping out single mothers at a care facility on weekends. Last year, she began working toward a master’s degree in anthropology.

Still, she never considered looking for her own mother until recently.

“I didn’t want the world to know my story,” said Heit, who shied away from the public searches that are rampant on Korean television.

She changed her mind when a comfort woman in her 80s told her not to let the gaze of others stop her from living her life. “She told me, ‘So what if other people find out what happened to you? Just look at me. It’s worth it to find your family,’” Heit recalled.

Heit decided to appear on national TV, even if she didn’t stand a chance of being a K-pop star, to tell her story.

“I’m not scared anymore,” said Heit, who said she will keep on until the day she finds her mother.

And when she does come face to face with the woman who gave her up years ago, there is something she wants to say.

“Mom, you have two daughters. Ha-na and Doo-na. We’re all grown up and here I am in Korea. I don’t blame you at all, and if anything, I want to thank you.”