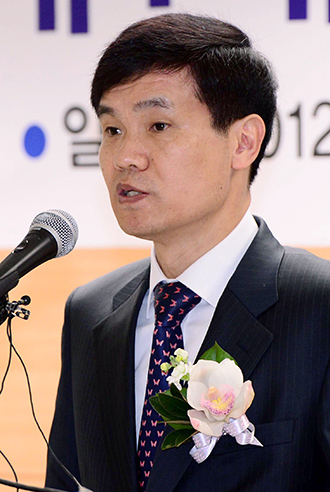 Lee Sung-bo ended a 28-year career as a judge to take the helm of the Anti-Corruption and Civil Rights Commission. [JoongAng Ilbo]

Lee had worked as a judge since 1984 and is known for reasonable and balanced rulings, including recognizing a Vietnam War veteran’s claim that the defoliant Agent Orange had damaged his health and accepting refugee status for people who fled Myanmar.

The former head of the Seoul Eastern District Court and Cheongju District Court was tabbed as a possible Supreme Court justice, but instead he has taken a different career course.

At his farewell speech, the 56-year-old Busan-born Lee said he was a little anxious about his new position, but confident the job is a continuation of the work he has done in court.

The graduate of Kyunggi High School and Seoul National University said he also feels some regret that he failed to actively communicate with citizens and co-workers at the Seoul Central District Court. But before wrapping up his 28-year judicial career, Lee said there’s one thing he wants to emphasize to other judges.

“A judge should not be swung by public emotion, but at the same time he should not completely ignore its cause,” Lee told the JoongAng Ilbo on his last day. “Judges and the public’s voice on the law can’t be completely separated.”

Movies like “Unbowed” and “The Crucible” last year brought huge public repercussions against courts, raising awareness of “unfair trials.” Lee said that although those films distorted what really happened, judges should also accept that concern about the fairness of the trials was real.

Lee said he never spoke with judges regarding the cases, but judges should be free to seek opinions.

As new chief of the Anti-Corruption and Civil Rights Commission, Lee has set a goal.

“I want to first help solve ‘chronic disease’ in our society. Corruption like avoiding military service in an unlawful way and receiving bribes are known to most people, but still remains a social vice, so I will try to focus on revolutionizing those bad habits.”