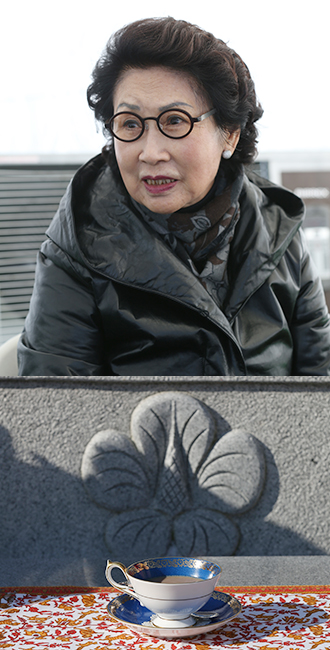 Jang Ok-ja, widow of Posco founder Park Tae-joon who died a year ago, prepares a cup of coffee to place on his gravestone at a daily visit to the Seoul National Cemetery. The 82-year-old Jang has visited Park’s grave each day since his death. By Shin In-seop

On Dec. 6, when the cold spell that brought snow the previous day still lingered in the air, a black sedan passed through the entrance gate of Seoul National Cemetery. An elderly woman stepped from the car and paid her respects at the grave of her husband, Park Tae-joon.

Jang Ok-ja, 82, entered a tent and carefully prepared Park’s favorite drink, coffee, and set it on his gravestone.

To most people, her late husband was known as the “King of Steel,” founder of Posco, the world’s leading steelmaker. But to his widow, Park Tae-joon was simply a resident of Hyoja-dong, in the east coast city of Pohang where Park stayed in 1968 when working to build Posco, Pohang Iron and Steel Company at the time.

“When I visited him on weekends, my husband was looking out the window in his room [in Pohang],” she said.

Since the honorary chairman of Posco died Dec. 13, 2011, Jang has visited his grave every day.

The tent put up at the grave site is where Jang greets visitors who come from all corners of the country to pay homage to Park. On July 30, under the scorching sun, 36 people from Posco TMC, a subsidiary of Posco, came from Cheonan, South Chungcheong.

“We came here to remember Park’s teachings and spirit,” Jang Byung-hyo, the firm’s CEO, told the JoongAng Ilbo. Neighbors who came out to jog around the cemetery were also seen paying their respects to the former president of the Posco, the world’s fourth-largest steel maker.

For all of them, Jang prepared coffee and snacks at a table in the tent.

“Jang coming to the site and greeting visitors there every day is unprecedented in the history of the Seoul National Cemetery,” said a cemetery official.

“Visitors kept coming here even 100 days after [Park died],” the mother of five told the JoongAng Ilbo. “Who would greet these people if I am not here? At first, I just wanted to offer them a little courtesy like a cup of coffee, and now it has been a year.”

Park and Jang married in 1954, when the graduate of Tokyo’s Waseda University was an officer at the Korea Military Academy. Discharged as a major general in 1963, Park founded and managed what has become Asia’s third-largest steelmaker.

“My husband asked me to help him achieve goals with his utmost abilities for the sake of this country right after we married,” Jang said.

In 2000, Park sold all his real estate for a total of 1.45 billion won ($1.35 million). Park and Jang donated 1 billion won of that to the Beautiful Foundation charity.

As chairman of Posco, Park was committed to improving the lives of employees with better housing and educational facilities, establishing 27 schools in Pohang and Gwangyang.

A scholarship program introduced by Park for children of Posco employees that provides all tuition was the first of its kind in Korea.

Jang was a direct witness to the developments of the steelmaker with deep devotion put in by her husband and Posco workers from the beginning that made it possible for the company to become what it is today. Jang said the country’s top steelmaker is not a private company but “the company of the Korean people.”

“Posco should not be influenced by political maneuvering for special interests,” Jang added.