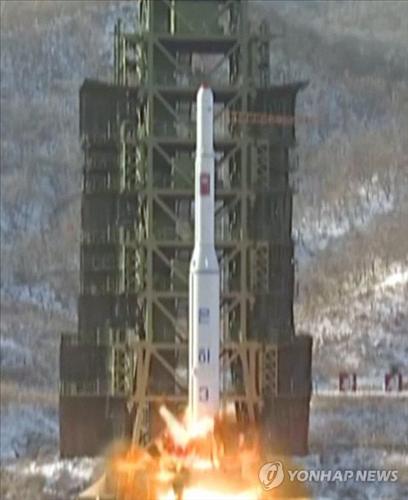 The scene of North Korea39s rocket launch on Dec. 12.

The White House said Thursday it does not believe North Korea has developed a missile capable of hitting the U.S. mainland despite its one-time success in orbiting a satellite.

To a question about whether the U.S. maintains the view that North Korean missiles are incapable of reaching the American homeland, White House Press Secretary Jay Carney said, "I think it's certainly still the view that is the case."

Carney's remarks were the first concrete public comments by a U.S. official this week on speculation that Pyongyang has mastered a technology for launching intercontinental ballistic missiles.

After three consecutive failures, North Korea put a satellite into orbit with a multi-stage rocket on Wednesday (local time).

Many recalled remarks in 2009 by then-U.S. Secretary of Defense Robert Gates that North Korea was within five years of developing ICBMs.

Carney said, "I don't have a timeline for you, and I won't."

He added, however, that North Korea and Iran are among the reasons that the U.S. has sought to beef up its missile defense system.

He drew a line between the two "rogue" states in terms of the level of nuclear and missile threats, although both, he said, should change course and abide by international obligations.

"They're certainly at different stages in the developments of their prohibited programs, and they're different countries, and there are, in some ways, different issues at stake," he said. (Yonhap)