Why did Seoul say North rocket was dismantled?

Why did Seoul say North rocket was dismantled? 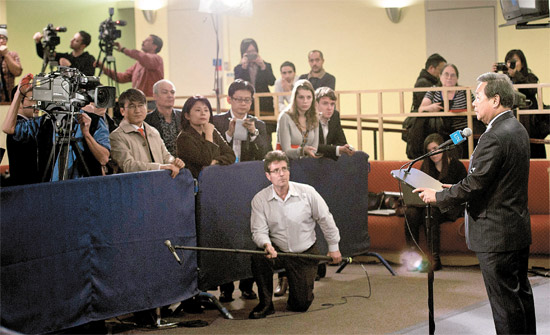 Questions still remain about whether North Korea removed its long-range rocket from the launchpad the day before it was tested or whether the South Korean government was working with really bad intelligence.

A day before the long-range rocket was successfully launched Wednesday, a number of South Korean newspapers and broadcasters reported that Pyongyang appeared to have dismantled the rocket, citing government sources.

On Tuesday, a high-ranking South Korean official told the JoongAng Ilbo, “Starting from Monday, a group of vehicles carrying equipment used for disassembling a rocket were detected near the launchpad.” Government sources also told reporters that “it would be hard to launch within the next 10 days.”

When the rocket blasted off successfully Wednesday morning, reporters assumed the government had wrong information on the launch despite days of government claims that the North Korean site was being closely monitored by it, the U.S. and Japan and that information among the nations was being fully shared.

Washington didn’t deliver any report of a dismantling of the rocket to Seoul, a U.S. government official told the JoongAng Ilbo on the condition of anonymity Thursday.

“We don’t know anything about the allegation that the rocket was dismantled,” the official said. “We have never produced that kind of information.”

A diplomatic source in Washington also told the JoongAng Ilbo: “U.S. officials say they don’t understand how these reports were made. As far as I know, the source [cited by Korean reporters] was not shared with Washington.”

Japan’s Sankei Shimbun reported Thursday that the U.S. and Japan were aware that the North’s launch was imminent.

“The U.S. government delivered the message that the North’s rocket launch was imminent to the Japanese government,” the newspaper said, citing a couple of high-ranking Japanese officials. “However, Washington didn’t offer the information to the South Korean government.”

Japanese Defense Minister Satoshi Morimoto said Thursday, “The Japanese government confirmed that the North removed the rocket from the pad.” Morimoto said Japan does not know whether the rocket was reinstalled or replaced with a new one.

“We assume that the North took down the rocket and then launched a reserve one immediately,” the Sankei Shimbun reported.

Minister of National Defense Kim Kwan-jin said Wednesday his government knew when the launch was imminent. He said the military saw that the North was repairing the rocket by using a crane at the launchpad.

A high-ranking South Korean government official told the JoongAng Ilbo Wednesday that on Tuesday morning, the rocket was removed but in the afternoon it was returned to the pad. The official said the government was aware of the situation, but it didn’t update reporters after telling them about the dismantling.

However, Japan’s Asahi Shimbun said the notion that the rocket was dismantled was deliberate misinformation, citing a North Korean official in China.

“The rocket was initially scheduled to be launched on Tuesday,” the newspaper said. “It was a false tip that the North disassembled it. The reason why the North extended the launch window [on Monday] was to mislead South Korea, the U.S. and Japan.”