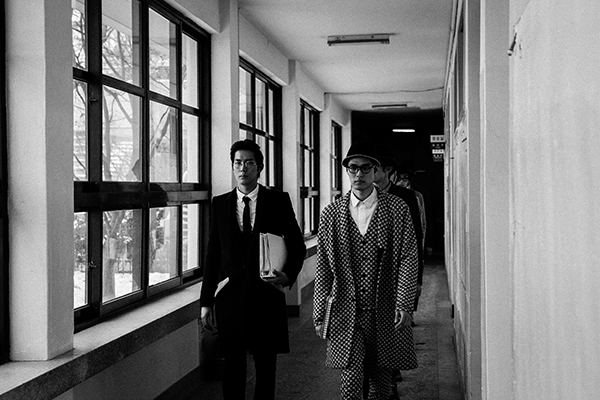 
Elementary students and their teachers moved to another school last August, but learning is continuing in the building they abandoned on the campus of Hongik University.

Chung Yeon-shim, a professor of art studies at Hongik University’s renowned College of Fine Arts, and her graduate students have organized a site-specific exhibition in the old elementary school building. Some of the invited artists have been working there since last month to make and install their works. 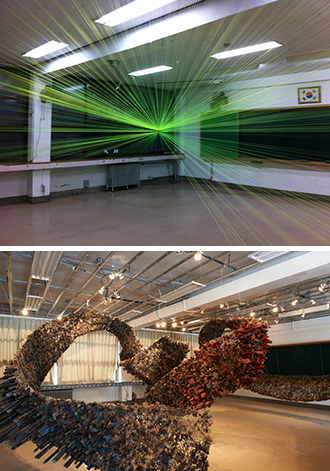 Top: An installation by Lee Hyung-woo and Cho Yong-joon. above, is also part of the show at a former school. Above: Choi Yun-woo’s work is on the third floor of the school building. Provided by exhibition organizers

As a result, each classroom of the school building now contains at least one piece of art under the exhibition titled “Project 72-1: School as a Laboratory.”

The exhibits include spectacular sculptures and installations, such as Choi Yun-woo’s work in a classroom on the third floor. A giant sculpture that seems to be wriggling in the air is made of numerous rolled-up magazine pages of various colors.

An installation work on the second floor by the team of Lee Hyung-woo, professor of sculpture in the university, and sculptor Cho Yong-joon is another spectacular exhibit. The work consists entirely of green lines that look just like laser beams or flashes of light.

Exhibits in the old school building also include paintings, photography and video works.

Photographs by Bae Bien-u, who is well known for his black-and-white images of pine trees resembling traditional Eastern ink paintings, take on a ambiance in a classroom that is quite different from how they would appear in a museum.

Fashion designer Cy Choi presented a performance by male models playing the roles of a teacher and students at the opening of the exhibition last Monday. The “students” wore black-and-white clothes with dot patterns. “[The] dot is the most basic figure,” said the designer.

“A school is the place where the raw is refined and new things are learned,” said professor Chung. “Now, in this place, artists have experimented with new themes and installation conditions unique to a school building.”

* The exhibition runs through Saturday. Admission is free. The school is open 10 a.m. to 5 p.m.

For more information, send an e-mail to project72_1@naver.com.