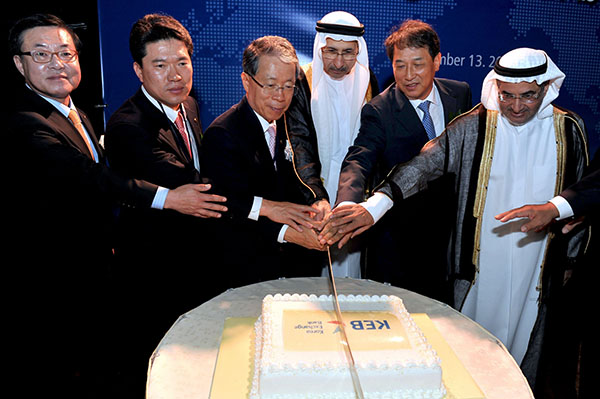 KEB President Yun Yong-ro, third from left, and Sultan Bin Nasser Al Suwaidi, governor of the Central Bank of the United Arab Emirates, third from right, and Kwon Tae-kyun, Korean ambassador to the UAE, second from right, celebrate the opening of KEB’s UAE branch Thursday. Provided by the company


Korea Exchange Bank became the first Korean commercial bank to open up a branch in the United Arab Emirates.

Under President Yun Yong-ro, KEB has been taking aggressive measures to enhancing its marketing and services and also expand into overseas markets to combat a global economic slowdown.

“With the opening of the branch we are now able to reduce the financial costs of companies in the region,” Yun said at a ceremony in Abu Dhabi.

The bank said its initial purpose is to assist Korean conglomerates that either have an established business or plan to expand in the Middle East. It will offer them foreign exchange services, corporate loans and deposit services.

The UAE is the world’s seventh largest oil producing area and many Korean companies have business there. Korean companies related to a UAE nuclear plant project, which Korea won in a competitive race in 2009, are stationed in the UAE.

“KEB Abu Dhabi is expected to play a key role in developing the economy of the UAE and supporting Korean companies to advance into countries with great potential such as in Africa,” Yun added.

The bank said in addition to its Bahrain branch and Dubai office, KEB now has the largest business network among Korean commercial banks in the Middle East. With the UAE branch, KEB now has a total of 52 overseas branches in 22 countries.

The state-run Export-Import Bank of Korea, the Korea Development Bank and Woori Bank have presences in the region but most of their financial services are limited. KEB has been aggressively opening branches and offices across the globe since its sale by U.S. equity fund Lone Star to Hana Financial Group was completed earlier this year.

One of Yun’s goals is to raise the bank’s transnationality index, which assesses the bank’s internationalization level including foreign assets, income and even foreign staff from the current 11 percent to 15 percent by 2015.

KEB is awaiting final approval of a branch opening in Istanbul and plans to open branches at the Clark Freeport Zone in the Philippines and Chennai, India next year. Yun expressed his intension to further expand in the U.S.

In an interview with Yonhap in Abu Dhabi, Yun said he plans to transform New York and Los Angeles offices to branches. He said he was waiting until Hana Financial Group’s acquisition of the Broadway National Bank in the U.S. is completed.

Although KEB has offices in New York, Los Angeles, Atlanta and Seattle, most of their business has been limited to corporate loans.

Among the people who took part in the ceremony in Abu Dhabi were Kwon Tae-kyun, Korean ambassador to the UAE, and UAE Central Bank Gov. Sultan Bin Nasser Al Suwaidi.