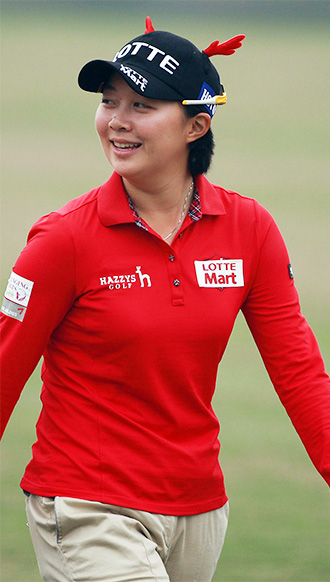 “Super Rookie” Kim Hyo-joo claimed her maiden victory as a professional golfer yesterday when the 17-year-old beat her compatriot Kim Hye-youn in a nail-biting final round during a KLPGA-sanctioned event in China.

At the Hyundai China Ladies Open, held for three days in Xiamen, Fujian Province, Kim Hyo-joo carded a three-under 69 yesterday, while Kim Hye-youn, 23, settled for a one-under 71. The two Kims entered the final round as co-leaders, both at eight-under.

It is the first win for Kim Hyo-joo since she turned professional in October, but her second win on the KLPGA. The junior at Seoul-based Daewon Foreign Language High School won the Lotte Mart Ladies Open on Jeju in April, becoming the first amateur in two years to win a KLPGA title.

Neither of the two emerged as a clear winner until the final hole.

Kim Hyo-joo carded a bogey on the par-4 10th, surrendering the lead to Kim Hye-youn, but tied the game with a birdie on the 14th hole.

The par-four 18th was the decider, with Kim Hye-youn carding a double bogey. Kim Hyo-joo held her breath and putted for par.

The event, one of the major events in China, also featured some leading golfers from China, Taiwan, Hong Kong and Macau. China’s top-ranked golfer Feng Shanshan finished in a tie for third along with two Koreans, Jang Ha-na and Lee Jung-min.