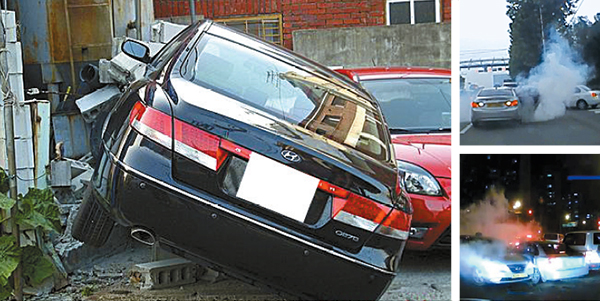 Left: A car owner posted this picture of his Hyundai Motor Grandeur crashed into a wall on the Internet. The driver claimed the car suddenly and unexpectedly accelerated as he was parking it. The photos on the right also show cars that owners claimed accelerated on their own while driving. [NEWSIS]


One of the biggest fears a driver can have is sudden unintended acceleration, a phenomenon that is common enough that it is now accepted lingo in the auto industry. Examples have occurred in many countries and a range of auto brands, most recently the problems experienced by owners of Toyotas in 2009 and 2010, which led to a massive recall.

In Korea, car owners continue to be worried about sudden unintended acceleration, which is known by the acronym SUA, even though two government investigations this year cleared four cars that were involved in accidents. 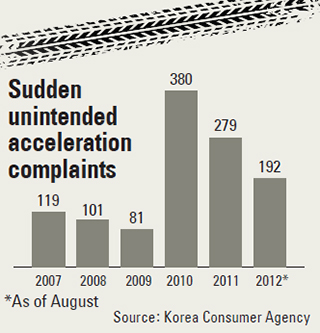 According to the Korea Transportation Safety Authority’s automobile default reporting center, 122 drivers have filed complaints this year that their cars accelerated without them stepping on the gas. The figure is more than three times the number of complaints last year.

Data collected by the Korea Consumer Agency shows a similar trend. For the last 20 months, an average of 24 reports of SUA are filed monthly to the agency.

“An increase in the number of reports doesn’t mean that number of cars that have SUA has increased,” an official from the ministry’s vehicle management and insurance division said. “It’s just that more people are suspecting their cars have problems after SUA issues were raised by the media.”

In May, the Ministry of Land, Transport and Maritime Affairs established a special joint investigation team to look into reports of SUA. The team is comprised of government officials, people from civic groups, automakers and universities. In August and October it announced the results of investigations that cleared all four accidents studied.

The team concluded that the accidents were caused by faulty driving by drivers or “unexplainable reasons.” The team used data from “black boxes,” or event data recorders, and CCTV footage from the scenes of accidents.

The findings made a lot of consumers skeptical and even angry, and local Web portals and online communities were flooded with criticisms of the team.

“I just laugh at this ridiculous investigation,” a netizen named Kwon Pan-gi wrote on the ministry’s Web site. “It’s just too sad that Koreans need to put their lives up front to ride in some junky vehicles made by automakers that are only focused on increasing sales.”

Auto experts admit that SUA is notoriously difficult to diagnose because the problem usually can’t be repeated in front of a mechanic.

There is speculation that SUA can be caused by electromagnetic interference with the vehicle’s engine control unit (ECU) or a lack of proper coordination of the vehicle’s electronic parts. But SUA also occurred in the old days when cars didn’t have electronics.

“It’s a very sensitive and complicated issue,” said a university professor of automotive engineering. “If the government announces that SUA really happened in some models, car manufacturers have to pay tremendous amounts of money and it could impact the entire auto industry.”

For its recent investigations, the ministry’s investigation team focused on interpreting data from EDRs, or event data recorders, in the vehicles involved in the crashes.

The device records certain information from a vehicle immediately before or during a crash.

But most EDRs are built into a vehicle’s airbag control module and record information about airbag deployment. Thus, if the vehicle experiences an SUA but the airbag is not deployed, no useful data is recorded.

However, experts said it’s better than nothing and Korea should standardize the information that EDRs collect, while making EDRs mandatory for all locally produced autos.

In the U.S., the National Highway Traffic Safety Administration promulgated such a rule in 2006 that will apply to 2013 and later models, requiring EDRs to record 15 data elements such as engine throttle and vehicle speed from the engine control module.

Korea is a bit behind the U.S. A recently revised law requires manufacturers to notify consumers whether their vehicles have EDRs. It also requires certain information to be recorded by EDRs.

The ministry said that for its next investigation, it is planning an open-test and will invite all auto experts involved in the SUA issue. It plans to artificially create a situation in which SUA can occur.

The ministry also said that after the investigation wraps up, it will ask a third-party organization to audit whether its investigation process was clear or not, hoping to swat down the accusations of skeptics.

“To solve people’s anxiety on SUA, the government is trying to find the reason for SUA, which has yet to be found throughout the world,” the ministry said in a release Monday. “If the cause of SUA comes from a vehicle’s mechanical problem, we will recall that model.”