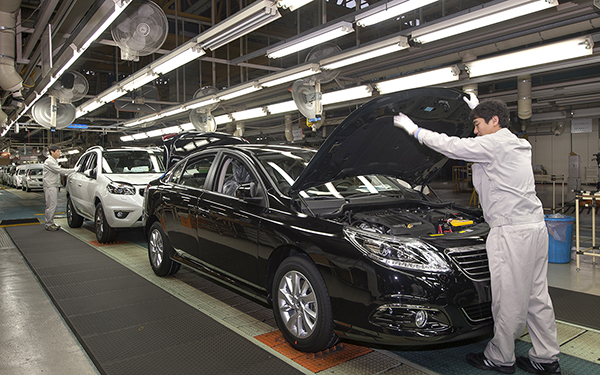 A Renault Samsung Motors employee inspects a newly built vehicle at the plant in Busan. Provided by the company

BUSAN - Renault Samsung Motors believes it can roll out more Nissan models if the new Rogue succeeds in the market, said Oh Jik-youl, the chief of the company’s manufacturing division.

At the press conference held at RSM’s Busan plant, Oh said there was a possibility for RSM to make other Nissan models in the future if the Rogue is up to standards.

“If we are able to make cars of good quality within a good price and show our capability to Nissan, I think we can produce other models in the future,” Oh, who is head of the Busan plant, said. “The production of the new Rogue will be the touchstone [of our ability].” 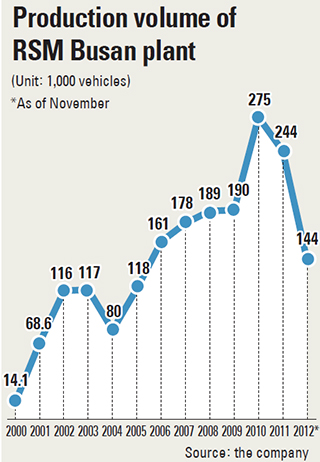 In July, Renault-Nissan Alliance Chairman and CEO Carlos Ghosn announced that the company will invest $160 million in the Korean unit to meet anticipated demand for the next-generation Nissan Rogue, a sports utility vehicle, with the hope of boosting the struggling RSM.

The nation’s fourth largest automaker has had a tough year with a sales drop of 46.7 percent on-year in the first 11 months as local consumers bought only 53,521 of its vehicles. This caused RSM to shrink its annual production at the Busan plant to half its maximum capacity of 300,000 vehicles. Also, more than 800 employees left the company in a voluntary retirement program in September.

But Oh, a vice president of the automaker, said that the morale of employees at the Busan plant has been picking up thanks to sales of the New SM5 Platinum. A face-lifted version of the midsize sedan was released on Nov. 7 and sold 3,806 units last month, up 24.8 percent from October.

“Production of the SM5 accounts for nearly half of our plant’s total production,” Oh said. “As the orders for the new SM5 Platinum pour in, our employees are getting encouraged.”

Workers at the plant resumed overtime since Nov. 23 to meet demand for the model. Day shift workers are now working an extra hour a day. This produces an extra 40 units of the SM5 a day. This month, it is planning to roll out 1,500 more units than in November.

Next year the automaker is set to release the SM3 Z.E., an electric vehicle (EV) and new crossover utility vehicle (CUV), which is based on its concept car Capture. Oh said that plant will first have a test production of the model in February to get ready for mass production.

“There is no major change in the production line as the model is based on our existing SM3 model,” he said. “The facility for the EV production is all set, and we just need to tune up a little bit after the test production.”

For the new CUV, the 57-year-old Oh said that the company will first import the model to see the market reaction, and then decide whether it should be produced in Korea or not.

Oh hasn’t released specific numbers for next year’s production plan for the Busan plant, but says he expects a slight increase in production for the domestic market, while export volumes will remain the same as this year. He said the company is not thinking of expanding production at this point.

“We don’t currently have secured enough orders for us to expand,” Oh said. “But we keep investing to produce next generation engines for the Renault-Nissan Alliance and for the new Rogue.”