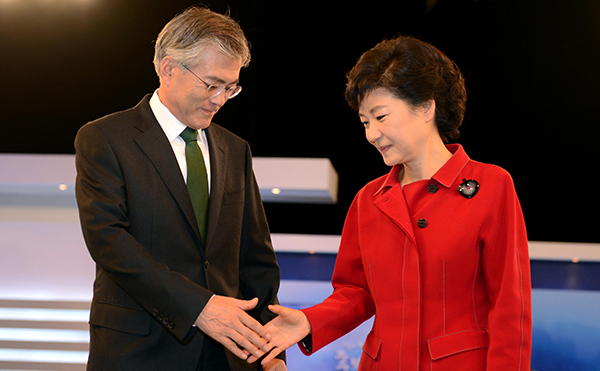 Park and Moon had a two-hour debate last night on social issues, broadcast live nationwide, following a first debate on political issues and a second on economics.

The debate consisted of four main parts: devising measures to deal with Korea’s low birth rate and aging society; improving the education system; preventing social crimes and ensuring public safety; and developing scientific technologies. Each part lasted about 20 minutes, and the two contenders had about six to 10 minutes for free discussion. 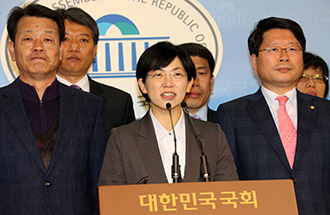 Lee Jung-hee, presidential candidate of the opposition Unified Progressive Party, announces yesterday at a press conference that she was pulling out of the race. [YONHAP]

The two candidates clashed over how to deal with the country’s low birth rate. Moon asked why Park signed a bill to abolish the Presidential Committee on Aging and Future Society along with other lawmakers under the Lee Myung-bak administration. Park responded that she thought the Ministry of Health and Welfare was capable of dealing with the issue.

Park challenged Moon asking how he would implement his pledge to give about 100,000 won ($93) monthly to parents with children under 12 years old to encourage having children. Moon said he will not do it immediately but gradually.

When it comes to expanding health coverage, Park said she would expand the health insurance budget for patients with four deadly illnesses, which are rarely covered under the current insurance system.

Moon said the amount of additional funding Park has estimated, about 1.5 trillion won, is not enough to support the patients. Park stuck by her plan.

On the education system, Park expressed her concerns about the Korean Teachers and Education Workers’ Union, a left-leaning national union of teachers. Park said some left-wing, anti-U.S. teachers are giving biased educations to their students, promoting certain political parties and even pro-North Korea policies.

Moon said, “Not all of the things the union supports are wrong.” He said he supports “the right values of the union.”

They also had a heated debate on how to lower college tuitions. Moon said all students should benefit from half-cost tuitions regardless of income, all subsidized by the state. Park said students from low-income households should get free tuitions and those from richer families should pay partial tuition.

Earlier in the day, the UPP’s presidential candidate Lee, who said she was running solely to prevent Park from winning, dropped out after realizing she was helping Park’s chances by splitting the liberal vote.

“I give up my presidential candidacy in order to realize people’s desire for shifting power from the ruling party to the opposition,” Lee said at a press conference yesterday. Lee didn’t endorse, or even mention the name of Moon in her brief speech.

“We know people want to see a one-on-one debate [between Park and Moon],” Kim Mi-hyui, Lee’s spokeswoman, told reporters later. “She gave up the tremendous opportunity of not participating in the televised debate, which 10 million people watch. She sacrificed herself.”

Asked if the UPP discussed Lee’s resignation with the DUP, Kim said there was no discussion at all, and they won’t join the Moon’s campaign.

The UPP has received 2.7 billion won ($2.5 million) in state funds from the National Election Commission as the country’s fourth-largest party with six parliamentary seats.

The National Election Committee provides a certain amount of money to all parties with presidential candidates based on the number of each party’s parliamentary seats in an effort to prevent campaign corruption and support minor parties.

Under current law, even if a candidate pulls out of a race, his or her party doesn’t have to return the money to the election commission.

Conservatives in the South have criticized the UPP for getting state funding even though its candidate had no chance of winning.

When asked if the UPP would return the money, spokeswoman Kim said, “The current law doesn’t require it” and that they will “follow the law.”