Questions on North’s control of its satellite

Questions on North’s control of its satellite 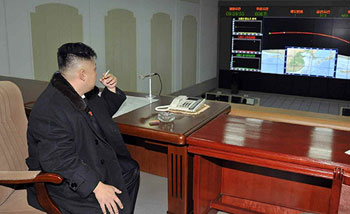 Following North Korea’s launch of the Unha-3 long-range rocket last Wednesday, which put the Kwangmyongsong-3 into orbit, experts are questioning whether Pyongyang has full control of the satellite.

North Korean leader Kim Jong-un reportedly visited the Space Center in Cholsan County, North Pyongan Province, to laud the scientists who successfully launched the rocket ahead of today’s one-year anniversary of the death of Kim Jong-il.

But ITAR-TASS News Agency reported yesterday that an expert at the North American Aerospace Defense Command stated that Pyongyang may not be “in control” of the “object that North Korea has put into orbit” during an interview with Japanese broadcasting station NHK on Friday.

It cannot be confirmed whether the satellite is transmitting information back and forth from the control center, the expert said. The orbit of the object seems to be unstable, but he added that there seems to be no danger of it leaving orbit yet.

Sanjay Acharya, chief of public relations at the ITU, stated that ever since it received notification that the launch would be delayed to Dec. 29, it “has not received any further information.”