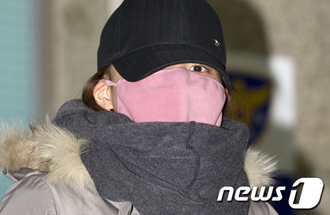 The 28-year-old official from the National Intelligence Service (NIS), surnamed Kim, is suspected of having put anti-Moon comments online over the past three months from an office in southern Seoul to influence the race.

With the presidential election only four days away, the allegation has emerged as a major campaign issue.

On Saturday, the intelligence agent, accompanied by her lawyer, entered the Suseo Police Station in southern Seoul at around 3:00 p.m., police officers said. The interrogation lasted about 4 hours.

"The police asked all the questions that needed to be asked and will decide whether to summon Kim again for more questioning after thoroughly evaluating her answers," an official from Suseo Police Station said.

Kim claimed innocence, saying, "I am falsely accused. I have not put anything online slandering Moon."

"It is regrettable that they are trying to drag me and the NIS, who have kept neutral, into the election," she told reporters as she left the police station.

The main opposition Democratic United Party, which raised the allegations in the first place, accused the NIS of interfering with the election by posting slanderous comments on the Internet about the liberal contender.

The NIS has denied the allegations, voicing "strong regret" over what it said was "malicious propaganda" against it and warning that it may take legal action. (Yonhap)