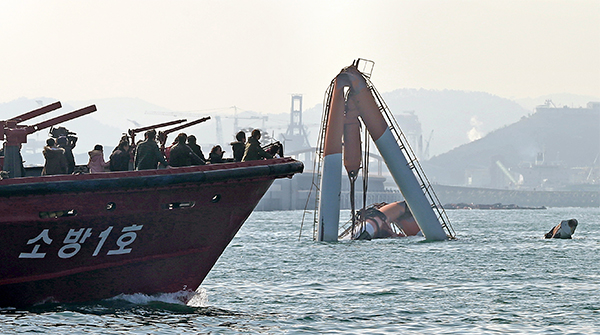 
A 2,600-ton construction vessel capsized off the coast of Ulsan Friday in the middle of over 2.5 meter (8.2-foot) waves, leaving seven crewmen dead and five other people missing as of yesterday afternoon.

The Ulsan Coast Guard reported yesterday that half of the 24 crew were dead or missing. Among the five missing is a 19-year-old high school student named Hang Seong-dae who was getting vocational training.

The remaining 12 members of the crew, including two other high school students in training, were rescued following the sinking, which took place around 7:15 p.m. Friday. They are all in a hospital.

The authorities said the vessel, which was installing two-meter concrete poles as a foundation for a seawall 1.5 kilometers off the shore of Ulju County, Ulsan, capsized after one of its five cranes broke in half and hit the vessel’s steering house.

The vessel was being buffeted by high waves and was making preparations to return to port due to the weather. Crewmen had called for a tug boat to haul up five anchors.

The investigators said two of five anchors were pulled up by the tug, robbing the ship of some stability in the high waves. Then the crane collapsed.

Authorities are reportedly saying the fatalities could have been prevented had the crew members been evacuated prior to efforts to remove the anchors.

Police said the vessel was a 28-year-old ship imported from Japan, sparking speculation that its age and poor maintenance caused the tragedy. Built by Japan’s Mitsubishi Heavy Industries in 1984, the vessel was originally purchased by the local firm Seokjung Construction in 2007. It had three cranes and the construction company added two more early this year, each 2,000 tons in weight.

“We do not know the exact cause of the accident yet as the investigation is not over,” said one of the investigators, who spoke on the condition of anonymity. “But we are not ruling out a possibility that the vessel’s age and the additional weight of the two new cranes are responsible for the accident.”

The Ulsan Coast Guard dispatched 70 rescuers and a helicopter to find the five missing men and to try to contain a leak of diesel and bunker oil from the capsized ship.