A year later, the mother of a teen suicide still mourns

A year later, the mother of a teen suicide still mourns 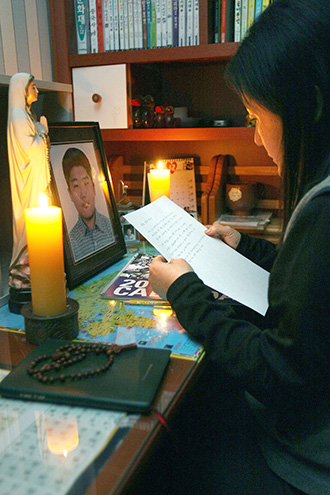 Yim Ji-young, the mother of Kwon Seung-min, a 13-year-old middle school boy who jumped to his death from his apartment in December last year after being bullied by two classmates, writes a letter to her son on Tuesday. By Gong Jeong-sik

On Tuesday night in an apartment in Daegu, the mother of a 13-year-old boy who committed suicide last year lit a candle on her son’s desk and stared at his picture.

A moment later, Yim Ji-young, 48, pulled out a piece of paper and started writing a letter to Kwon Seung-min ahead of the one-year anniversary of his death.

As she thought of last year’s tragedy, tears rolled down her cheeks.

On Dec. 20 last year, the mother lost her youngest son.

The boy was bullied by two classmates who wanted more online points in a computer game, MapleStory, which gives more points the longer a person plays.

They forced Seung-min to play the game using their IDs.

A four-page suicide note was found on the day the boy jumped from the balcony of his seventh-floor apartment.

The note detailed the abuse he suffered, shocking the nation into paying attention to the seriousness of school bullying.

“Today is Dec. 19,” Kwon wrote on the day before he killed himself.

“They wrapped a radio cord around my neck, dragged me around and told me to eat crumbs from the floor.”

“They took all my money so they could purchase items [for the game]. [The bullying] got more intense over time. They made me do their homework, tortured me with water, hit me, insulted my family and took my books so that I couldn’t study.”

This is what Yim wrote to her son:

“Although it has been a year without you, December is already here and I hope where you live isn’t as cold as it is down here. I really want to see you once in my dreams, but I don’t know why it is so hard to see my son’s face. I saw it every day when you were alive. I still sometimes stare at the front door in the evening. I am waiting for you to come in and ask me for a delicious dinner.”

She blamed herself for not protecting Seung-min.

“I’m so sorry for letting you go. I should have seen your sadness and your pain.”

She also wrote about the changes that have happened since he died.

“The world is changing. They are making stronger laws to prevent school violence. Some people call the law the ‘Kwon Seung-min Law.’ When we meet again, I hope I can proudly tell you about the changes your mother and other people have made. If you are looking down on this world and see your friends thinking about suicide, please tell them not to end their precious lives. I don’t want to see more sorrowful mothers hurt from losing their beautiful child.”

“I hope there is no pain where you are. Please know that I miss you very much and I always will.”

Yim plans to take the letter to the mortuary house where Seung-min’s body is kept in Dong District, Daegu.

For the last year, every day was full of pain for Yim, her husband and Seung-min’s 17-year-old brother.

The entire family suffers from insomnia, and they all take sleeping pills.

The boy’s father, a high school teacher in Andong, North Gyeongsang, left the school where he had worked for 21 years.

“I couldn’t leave my wife and the only son alone in Daegu,” he said.

The couple then began fighting against school violence.

In July, Yim published a book titled “The Longest Day of My Life” to share her experience and also held a series of anti-school violence events.

She met with other parents whose children were victims of school violence and offered support and advice.

“Students must know that bullying can cause the ultimate pain for someone and his or her family. It could cause someone to commit suicide,” Yim said.