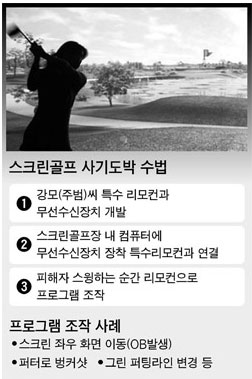 BUSAN - A screen golf gambling ring that hustled hundreds of millions of won from people was caught by prosecutors.

The prosecution also indicted six additional accomplices, including a 51-year-old man surnamed Park, without detention and put three on the wanted list.

According to the prosecution, Kang asked Heo, who has a master’s degree in engineering, to create a small remote that can control screen golf programs while a game is on, as well as a wireless signal receiving device.

The prosecution said the remote was much smaller than a normal television remote so it could be concealed in a pocket.

Allegedly, Kang and Park teamed up with other accomplices in September 2011 then attracted a man surnamed Park.

Park, 48, is known as a rich man by his neighbors. They talked him into coming to a screen golf shop that Kang owns in Geumjeong District in Busan and bet on a game of golf.

Park, who used to play screen golf for money with friends and coworkers two to three times a week, readily agreed to play.

That’s when they took out the remote.

The prosecution said they controlled the program so that when Park hit his shots, the program would say his balls went into a bunker or into the rough.

While Kang controlled the remote, his accomplices told Park, “Your swing was too big,” or “You didn’t make a correct shot,” to keep him from catching on.

The prosecutors said the conned man is good at golf, usually finishing under par at a golf course, but there was nothing he could do but lose money.

The prosecution said Kang and Heo also produced about 20 additional devices and sold them to people for 1 million to 4 million won.